After discovering that ten holding firms associated with FTX Digital and Alameda Research invested roughly $5.4 billion into nearly 500 firms and projects, people have been curious about a few specific investments. One specific investment made by FTX Ventures Ltd. was for $25 million into the Ohio-based firm 80 Acres, a company that specializes in […]

After discovering that ten holding firms associated with FTX Digital and Alameda Research invested roughly $5.4 billion into nearly 500 firms and projects, people have been curious about a few specific investments. One specific investment made by FTX Ventures Ltd. was for $25 million into the Ohio-based firm 80 Acres, a company that specializes in vertical farming. It seems that 80 Acres Farms was partnered with a Bahamian hydroponic producer called Eeden Farms, and Ryan Salame, the co-chief executive officer of FTX Digital Markets, toured 80 Acres farm in Ohio with the Bahamian prime minister Philip Davis.

The Financial Times (FT) recently published documents that show FTX Digital’s and Alameda Research’s portfolio of investments, which adds up to a whopping $5.4 billion. Among the hundreds of investments, FTX and Alameda invested in companies that were not related to the crypto and the blockchain industry.

One of those investments was 80 Acres Farms, a vertical farming company that provides produce to grocery stores like The Fresh Market, Kroger, and Whole Foods. The two co-founders of 80 Acres were recently featured in a BBC “Follow the Food” segment.

Now people might wonder why a cryptocurrency firm, and more specifically FTX Ventures Ltd., invested in a company that grows produce using hydroponics in vertically stacked layers. It’s not entirely clear why, but it is public knowledge that Ryan Salame, the co-chief executive officer of FTX Digital Markets, visited the company’s farm in January 2022.

As the Government remains committed to the advancement of the Green Economy in The Bahamas, Prime Minister Davis and Honorable Clay Sweeting recently toured the flagship 70K Farm owned by 80 Acres Farms.
Read the Prime Minister’s remarks here: https://t.co/eST1lnLcQo 1/2 https://t.co/SrskJoI6gl 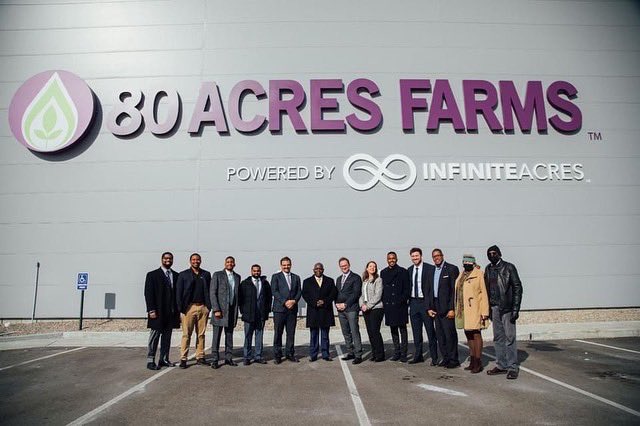 According to The Tribune, in January 2022, Salame and the Bahamian prime minister Philip Davis toured 80 Acres Farms with the Bahamian minister of agriculture Clay Sweeting, and the owners of a Bahamian hydroponic firm called Eeden Farms. Tribune business editor Neil Hartnell explained 80 Acres farm in Ohio was to serve as a model for Eeden Farms on Nassau’s Gladstone Road.

80 Acres is an Eeden Farm partner and this year, the Bahamian hydroponic producer rebranded its farm to Eeden Acres on Jan. 24, 2022. Hartnell detailed that government officials from Ohio were also present on the 80 Acres tour, alongside executives from Sysco Bahamas. As far as the Bahamas was concerned, Hartnell explained that Eeden and 80 Acres would “invest $60m in developing a 71,000 square foot facility able to grow ‘300 times more food’ than a traditional farm.”

Lincoln Deal, Eeden Farms’ co-founder, told The Tribune that the land for the farm “is in hand.” A few months prior to the Cincinnati 80 Acres farm tour, FTX relocated its headquarters from Hong Kong to The Bahamas in September 2021. The documents FT published this week show that 80 Acres received $25 million from FTX Ventures in an equity investment.

Furthermore, Salame reportedly gave $22 million to Republicans for the 2022 midterm election cycle, according to opensecrets.org data. Salame, a Sandisfield Massachusetts native, was known for being a big spender as he owned four restaurants and roughly six properties in Lenox, according to The Berkshire Eagle. It’s not entirely known what relationship FTX Ventures and Salame had with 80 Acres, but it seems Salame was quite involved with Eeden Acres’ and 80 Acres’ ventures.

On the company’s Facebook page, Eeden’s page name is called Eeden Acres, and it shows 3D mock-up photos of an Eeden Acres building with a roof fully covered in solar panels. Eeden’s co-founder Lincoln Deal recently talked about “the disruptive changes in the agricultural industry” at the University of The Bahamas, the same day FTX’s financial troubles ensued.

During his interview with Mario Nawfal’s Twitter Spaces crew, FTX co-founder Sam Bankman-Fried admitted that withdrawals to Bahamian residents took place before FTX fully collapsed, and possibly on two occasions. In a two-part interview with Tiffany Fong (here and here), SBF explained FTX execs codified the Bahamian withdrawals because he did not want to reside on an island with angry residents.

What do you think about the connections between FTX Ventures, Ryan Salame, Eeden Farms, and 80 Acres Farms? Why do you think the co-chief of a crypto exchange would visit a vertical farm plant in Ohio with The Bahamas’ PM? Let us know what you think about this subject in the comments section below.

Polygon (MATIC) Amongst High Performers, Can It Maintain The Rally?

On Elon Musk’s McDonald’s Provide And Affect To Push DOGE Worth...