There were a few fundamental headlines of consequence this past session – such as the Bank of Canada’s 50bp rate hike and the bank CEOs voicing recession concerns – but that wouldn’t change the underlying course of market conviction. We are moving away from the hearty influence of the NFPs, Powell remarks and ISM service sector activity report over this past week and transitioning into the pull of anticipation for the FOMC rate decision (and a myriad of other major events) scheduled for the week ahead. That focus is important as it will influence the level of overall volatility in the market and critically the ability to establish and maintain trends. In the case of ‘implied’ (expected) volatility from the VIX, the rebound from the index’s 7-month low last week continued, but the tempo noticeably cooled. 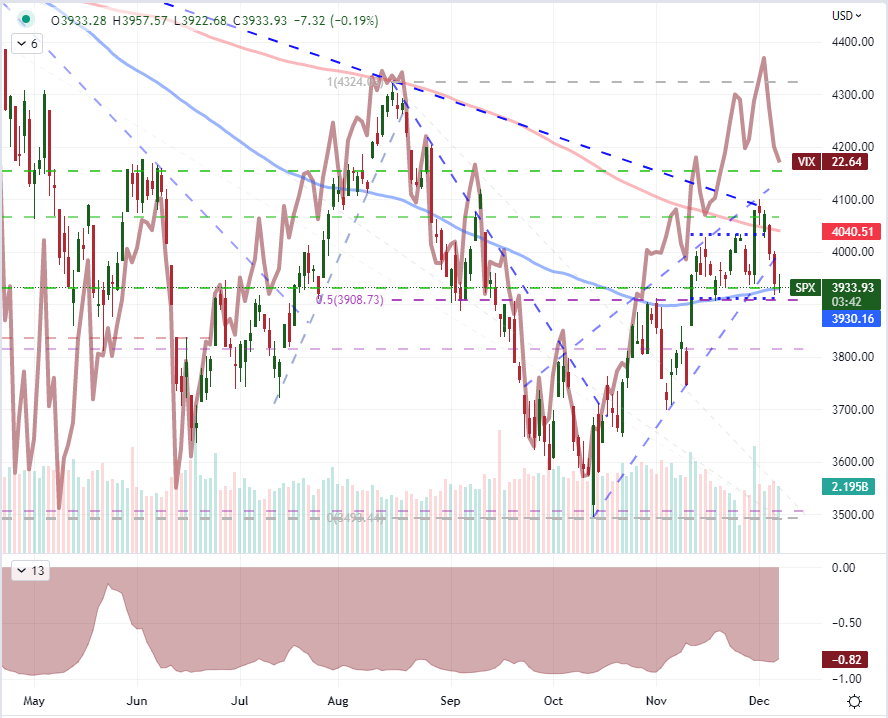 It looks more like a genuine ‘revision to a mean’ than the spark of a fire of activity. That loss of traction seemed to translate readily to risk sensitive assets. Without the strong drumbeat of optimism or pessimism, market participants tend to afford greater conviction to prominent technical barriers. It’s worth highlighting that the S&P 500 maintains a remarkably strong (inverse) correlation to the VIX, but the index stalled at the past three weeks’ range floor reinforced by the midpoint of the August-October range and 100-day SMA. Then again, if push comes to shove, fear is a stronger emotion than greed. With the German DAX, UK FTSE 100, Hong Kong Hang Seng Index, EEM emerging market ETF and crude oil (all ‘risk assets’) pitching lower this past session; beware the potential self-immolation that can be born out of fear itself. 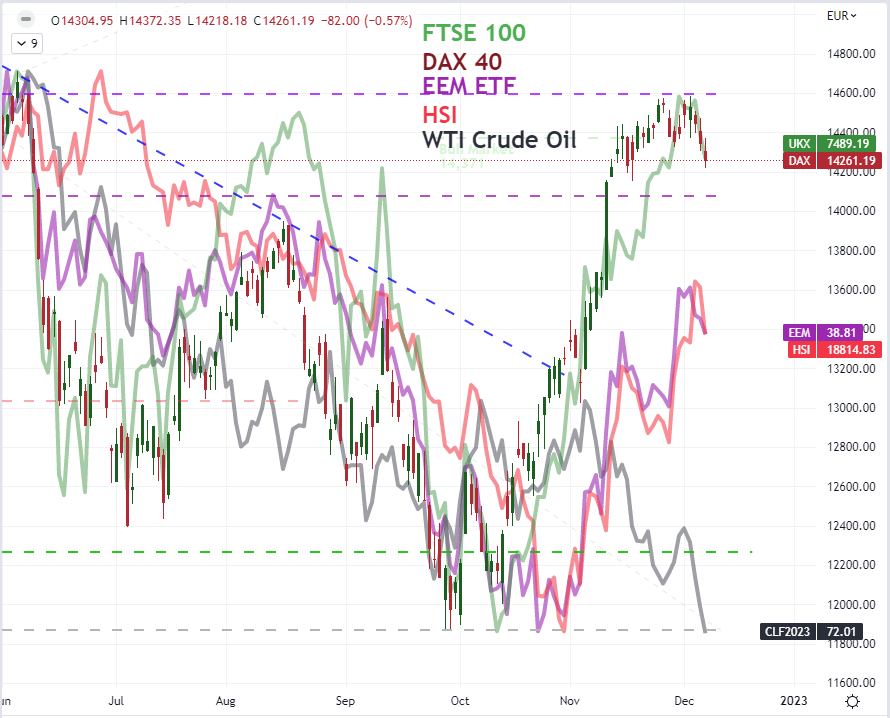 If, on the other hand, the markets follow the scheduling of the macro economic docket, there is not much over the coming Thursday session that would readily be expected to generate a localized tremor in trend development, much less a global move. This past session focused on second tier and lower central bank rate decisions. The top billing was the Bank of Canada (BOC) which hiked rates 50 basis point, which lifted the country’s benchmark rate to 4.25 percent. Putting that benchmark in context, it matches the Reserve Bank of New Zealand for the highest rate of the major central banks. That said, NZDCAD would not be put off its remarkable bullish trajectory over the past few months. What’s more, the so-called Loonie wouldn’t generate meaningful bullish traction on the news even against less controversial pairs like EURCAD or CADJPY where there is a distinct yield advantage. The key consideration is that this was an expected outcome and the BOC’s rhetoric would suggest that future rate hikes were highly data dependent. In factor, overnight index swaps suggests that the BOC may essentially be at its terminal rate of this era, whereas groups like the FOMC and RBNZ are seen tightening further into 2023. For the forthcoming session, there may be some insight from the RBA bulletin or ECB President Lagarde’s remarks (the ECB decision is next week), but the market is not highly tuned to the subtle. 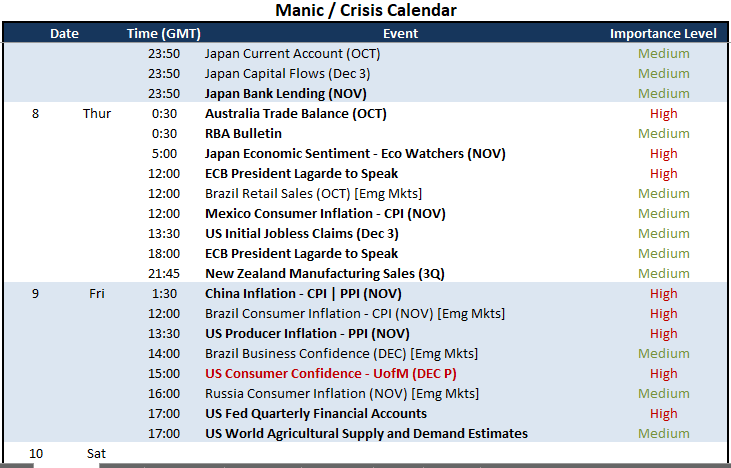 While the Canadian Dollar didn’t find a lot of fundamental backdrop to mount a full-blown reversal, the conditions are still the type that would suggest moderation is the path forward. For something like the S&P 500, that builds up the weight of the narrow range the index has carved out these past weeks. Alternatively, it can also translate into a curb on remarkable trends like that seen from NZDCAD. This charge is as much a New Zealand Dollar rally as it is Canadian Dollar slide, but the net results are extraordinary. While the longer-term yield differential based on the proxy of the 10-years may be breaking higher, the extreme 20-day rate of change from this pair is an outlier in this environment. That doesn’t mean it has to tip into a full-tilt reversal, but a stall looks increasingly probable – especially if risk appetite doesn’t keep the lights on for nascent carry trade. 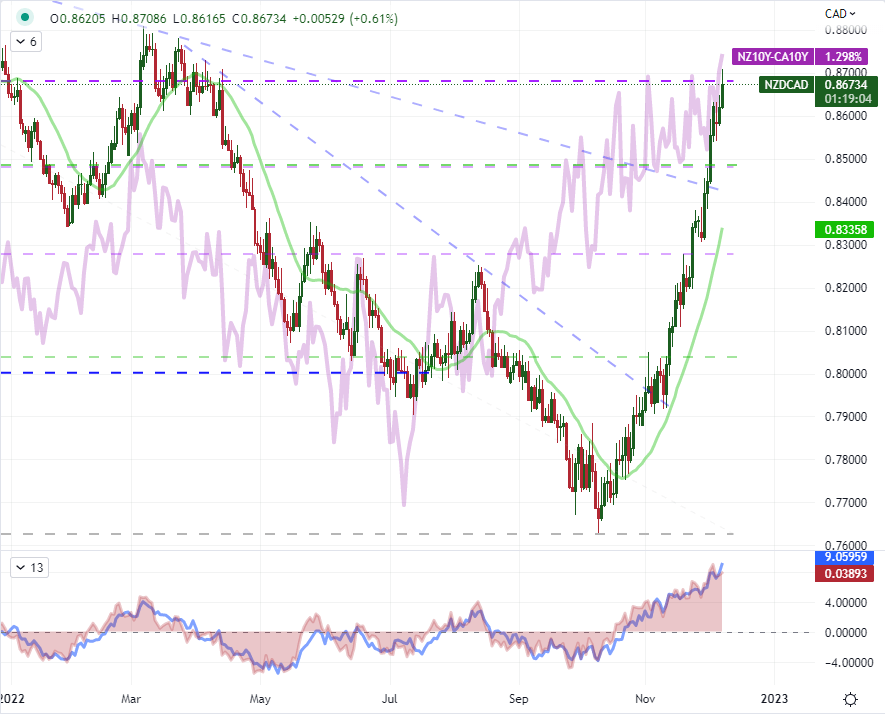 A step further, moderation is not just the territory of carry trade and risk leaning assets. The Dollar based crosses are casually exposed to risk trends but are exceptionally sensitive to the interest rate speculation of next week given the direct exposure to the FOMC meeting. That said, I’m keeping close tabs on the technicals and volatility levels behind the majors. For the DXY Dollar Index, there isn’t a lot of distinctive technical barriers which the chart watchers will opportunistically pick at; but major crosses like EURUD, GBPUSD and USDJPY do have more overt barriers. Below, USDJPY’s rebound from its 200-day SMA test brought the market right back up to the former support at 137.50, holding the line as new resistance. While these are not particularly large ranges to deal with, if that is the pace of the market, it is important to adjust to the tempo. 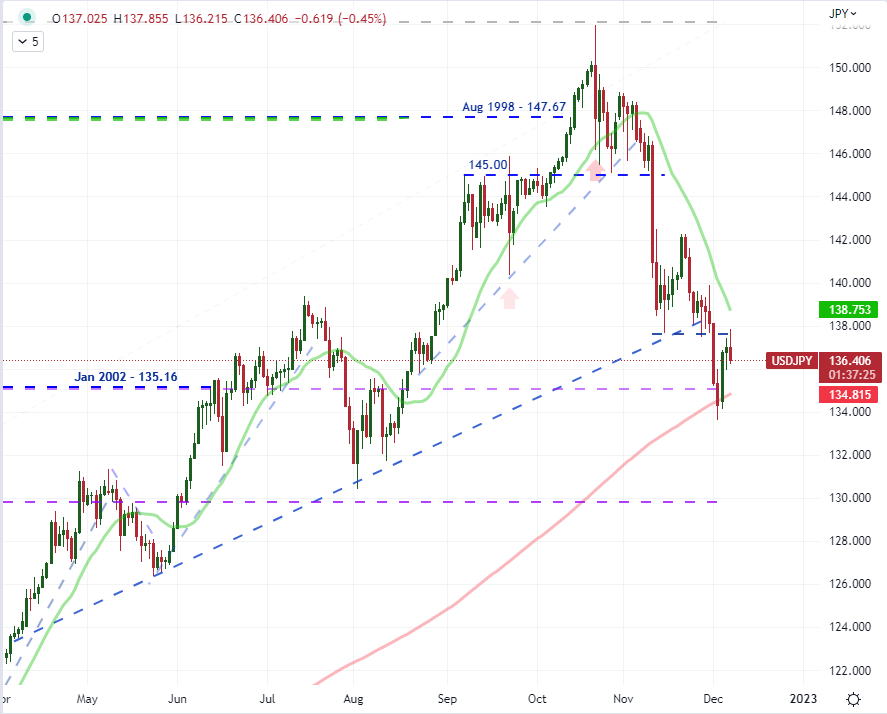 Rate of interest differentials level to the next EUR/USD – Nordea

Upside threat to XAU/USD forecast of $1,850 at 12 months’s finish – Commerzbank