Bitcoin has a regulation problem, i.e., major regulatory agencies do not understand it.

The latest critique came from the top leadership at European Central Bank (ECB), who stated that Bitcoin’s value “is likely to be artificially induced” while adding that the crypto-asset is on a “road to irrelevance.”

In the blog post, ECB Director General Ulrich Bindseil and Analyst Jürgen Schaff went on to claim that the world’s largest cryptocurrency has “never been used to any significant extent for legal real-world transactions.” The duo even blamed Bitcoin’s “conceptual design and technological shortcomings” that make it “questionable as a means of payment.”

The post made no mention of any specific data points suggesting how the central bank officials came to the conclusion that Bitcoin’s market valuation is based on pure “speculation.” Their statements appear to be highly biased, as noted by many industry experts.

The European Central bank (@ecb) covered Bitcoin on their blog today.
It said bitcoin is ‘rarely used” for “legal” transactions.
But offered no statistic to back it.
So went down the rabbithole.
Time for some numbers ☕️ https://t.co/M4lRgqM2VT 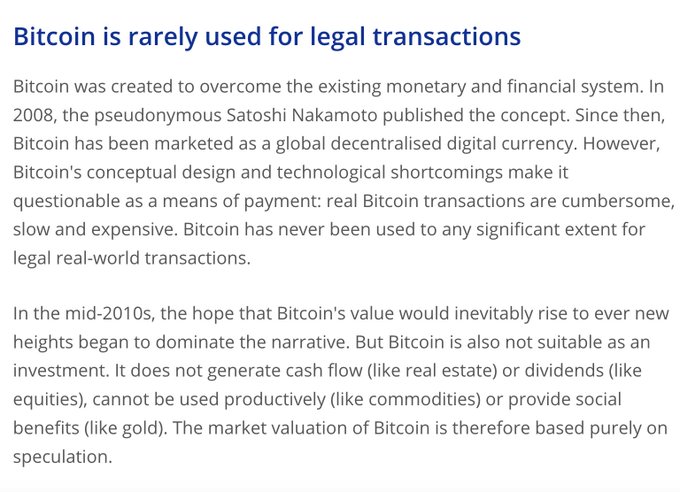 The officials stated, “the belief that space must be given to innovation at all costs stubbornly persists.” The duo does not seem impressed by Bitcoin’s underlying technology – blockchain. According to them, DLT/blockchain has so far “created limited value for society” regardless of “how great the expectations for the future.”

“Since Bitcoin appears to be neither suitable as a payment system nor as a form of investment, it should be treated as neither in regulatory terms and thus should not be legitimized. Similarly, the financial industry should be wary of the long-term damage of promoting Bitcoin investments – despite short-term profits they could make (even without their skin in the game).”

Critics Get Louder After FTX Scandal

Crypto had chaotic days in the past. But the collapse of FTX and the subsequent accusations of fund appropriation tainted the industry. The cascading events then pushed other platforms, which were following a safe path to growth instead of the crypto riches, to face the wrath of potentially unsensible regulations.

The catastrophe appears to be strengthening the hands of critics and powering regulatory entities to police the industry.

Hence, as critics got louder, calls for regulation in the space followed suit. FTX’s insolvency will likely expedite digital asset regulation in the United States. A new law called Markets in Crypto Assets (MiCA) in the European Union (EU), which won’t take effect for a few years, is expected to impose governance standards for crypto companies similar to other kinds of regulated financial firms in a bid to avert internal failings such as that of FTX’s.

However, the ECB officials said that regulations should not be mistaken for approval.