The Euro continued its decline against the greenback this morning as rising covid cases in China seem to have dented sentiment. The risk-off mood has benefitted the dollar as investors continue to flock to the greenback as a safe haven bet. The pair is trading around 1.0250 down for the third day in succession and at a one-week low.

On a positive note for the Euro, German PPI prices declined by 4.2% for the month of October. YoY PPI remains relatively high at 34.5% but the data will no doubt add further hope that inflation has peaked. As much as the figures will be received positively, they come on the back of hawkish comments from ECB President Christine Lagarde on Friday who warned that the European Central Bank is committed to bringing down inflation in a timely manner. Lagarde elaborated by saying that continuing rate hikes is a necessity to get price pressures back under control. These comments were echoed this morning by ECB Chief Economist Phillip Lane who stated that he doesn’t think December will be the last rate hike as he believes inflation will still be a concern heading into 2023 and beyond.

The dollar meanwhile started showing signs of a resurgence toward the back end of last week, as a host of Federal Reserve policymakers maintained a hawkish rhetoric. This was coupled with better-than-expected retail sales and initial jobless claims data which brought the peak Fed funds peak rate expectation back into question. Markets are now pricing in a 43% probability of a peak rate around 5.25% in May next year, compared to 34% a week ago. Adding further strength to the greenback this morning is the covid situation in China which worsened over the weekend resulting in a five-day shutdown of the Baiyun district in Guangzhou. Chinese officials stated this morning that Beijing city is facing a severe and complex Covid control situation boosting the greenbacks haven appeal. 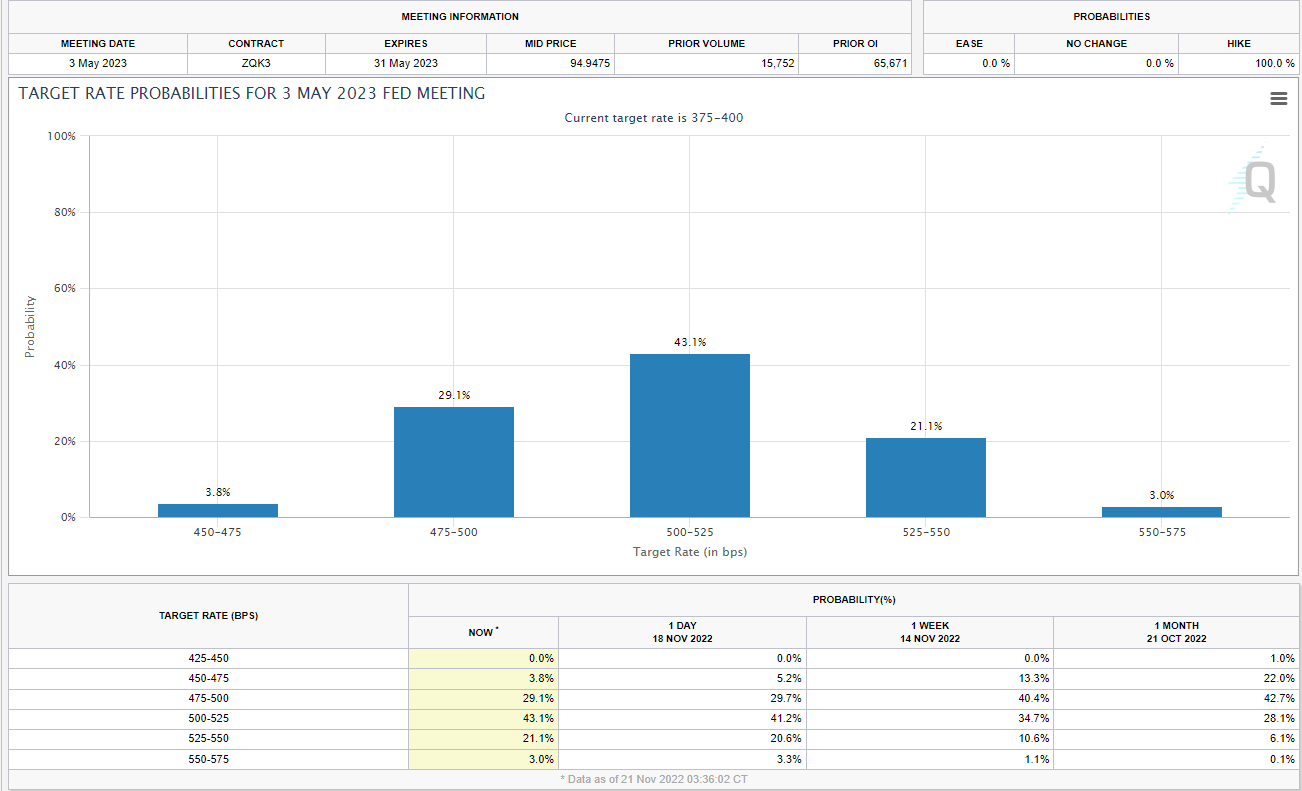 The biggest risk event for the pair this week remains the FOMC minutes release on Wednesday night. Considering the recent data releases and Fed rhetoric markets will no doubt be paying close attention. We also have Euro and German PMI data before the week is set to enter a potential period of low liquidity with the US Thanksgiving holiday break.

From a technical perspective, this morning’s decline on the pair has pushed it closer to the top of the bearish flag pattern which could provide some support in the near-term. A break below could bring the 100-day MA into play resting around the parity level. Price action on the pair is bullish but a break below parity may add some degree of skepticism for bulls moving forward.

Monetary Providers Chairman McHenry: One of many Largest Issues With American...