The European currency shows mixed trading dynamics, consolidating near 1.0200 and local highs from August 15. The day before, the euro, like many other currencies paired with the US dollar, showed active growth, which is the most significant over the past few days. The reason for the emergence of a strong “bullish” trend was the publication of October data on inflation in the US. The Consumer Price Index rose by 0.4% in monthly terms, remaining unchanged compared to the dynamics of September, while analysts expected acceleration to 0.6%; and in annual terms, the figure fell from 8.2% to 7.7%, while the market expected only 8.0%. In turn, the CPI excluding Food and Energy in October corrected from 0.6% to 0.3% in monthly terms and from 6.6% to 6.3% in annual terms. The released data reinforced confidence that the US Federal Reserve is likely to reduce the pace of further interest rate hikes in the near future in order to prevent a sharp deterioration in economic conditions for households and businesses. Most analysts expect only a 50 basis point correction in December, and monetary tightening could be further reduced. The focus of investors is statistics on consumer inflation from Germany: the dynamics of the indicator remained at the same level of 11.6% in October.

The British pound is trading with multidirectional dynamics, holding near the local highs of September 13, updated the day before. The American currency showed a sharp decline, reacting to the publication of October inflation statistics: the data showed a slowdown in the annual rate from 8.2% to 7.7%, which was significantly better than the market’s expectations of 8.0% and strengthened investors’ confidence that the US Federal Reserve will try to reduce the pace of interest rate hikes in the near future. Many analysts have again started talking about overcoming the peak of the current crisis, but it is not worth jumping to conclusions yet. Monthly inflation at 0.4% is still quite high and reflects the shift in the focus of the main dynamics of prices from energy and food products to the services sector. In addition, geopolitical risks are still strong, which have led to unprecedented sanctions pressure on Russia and the supply of its energy products to world markets. Today, investors followed the publication of data on the dynamics of the Gross Domestic Product (GDP) in the UK for the third quarter. The value slowed down from 4.4% to 2.4% YoY and from 0.2% to –0.2% QoQ, confirming the continued pressure of the energy and domestic political crises on the state of the national economy. Also, traders are looking forward to November 17, when British Prime Minister Rishi Sunak and Chancellor of the Exchequer Jeremy Hunt will present their medium-term budget plan, which may include significant cuts in government spending and tax increases. 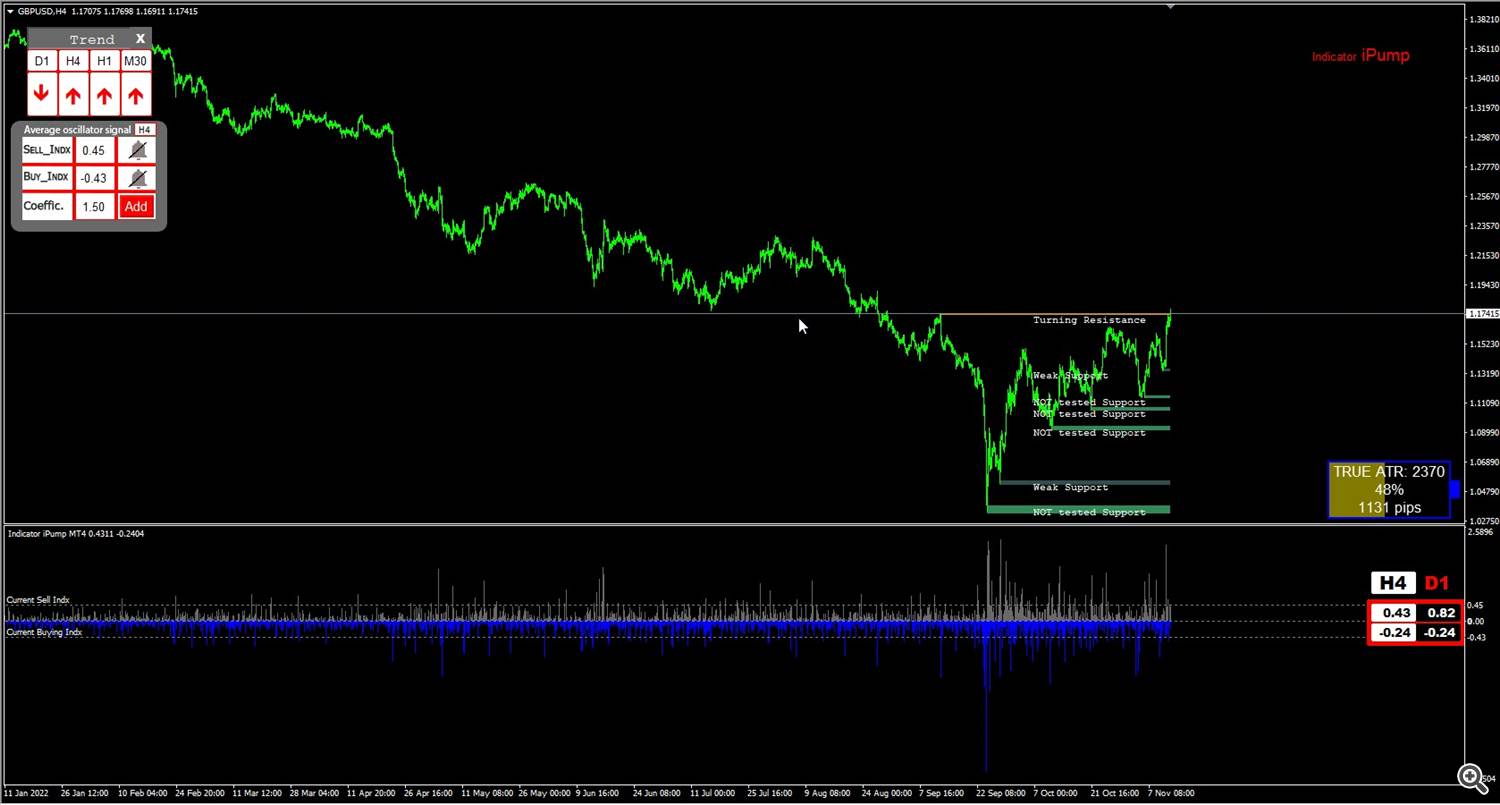 The New Zealand dollar shows mixed trading dynamics, testing strong resistance at 0.6000 for a breakout. Noticeable support for the NZD/USD pair was provided by the October report on the dynamics of consumer prices in the US. As analysts expected, inflation began to decline: real data showed a slowdown in annual terms from 8.2% to 7.7%, and in monthly terms it was fixed at the same level of 0.4%, contrary to the forecast of 0.6%. Now the vast majority of investors are counting on the US Federal Reserve to raise interest rates at the December meeting by only 50 basis points. The statistics released the day before from New Zealand had no noticeable effect on the market dynamics. The Business NZ PMI in October showed a decrease from 51.7 points to 49.3 points, while analysts’ preliminary estimates suggested a moderate increase in the indicator to 52.7 points, and the Food Price Index for the same period accelerated from 0.4% to 0.8%, reflecting continuing inflationary risks, although experts believed that the indicator would slow down to zero dynamics. 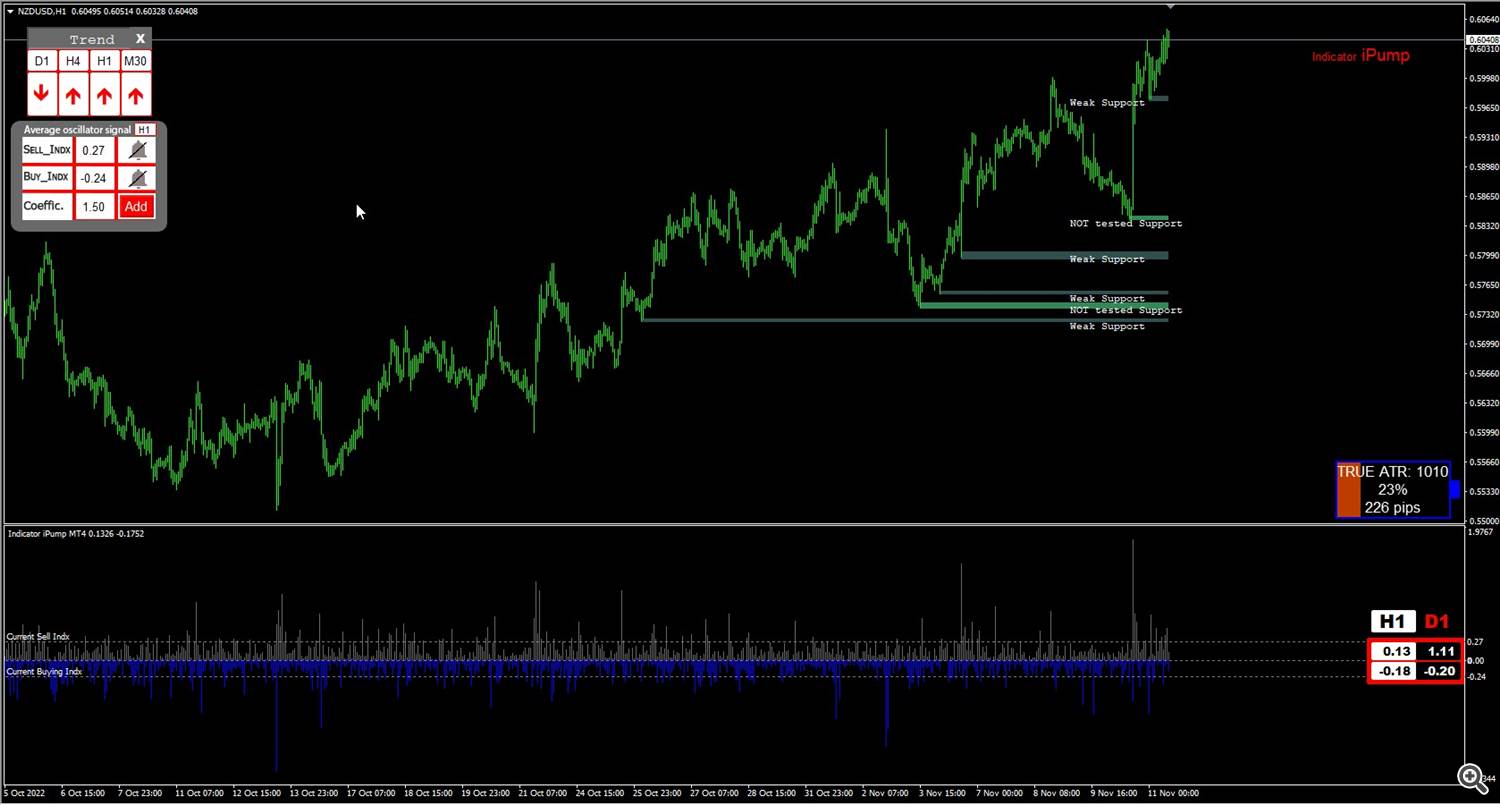 The US dollar showed the most significant decline against the Japanese yen in recent months, retreating sharply to around 140.00 yesterday. The USD/JPY pair updated local lows from September 5 in response to the publication of the October inflation report in the US, which reflected a stronger slowdown in consumer prices than expected. The annual rate corrected from 8.2% to 7.7% with the forecast of 8.0%, increasing the likelihood of a 50 basis point hike in the US Fed interest rate in December, which could also lead to a more measured policy by the regulator in order to prevent destabilization in the labor market. US markets are closed today due to the Veterans Day, so investor activity is likely to remain subdued. Investors are closing part of short positions, taking profits before the weekend, and take a lead from the publications from Japan, where the Producer Price Index in October rose by 0.6%, slowing down from 0.7% in the previous month, and the Domestic Price Index for corporate goods fell from 9.7% to 9.1%, which was higher than analysts’ forecasts of a slowdown to 8.8%. 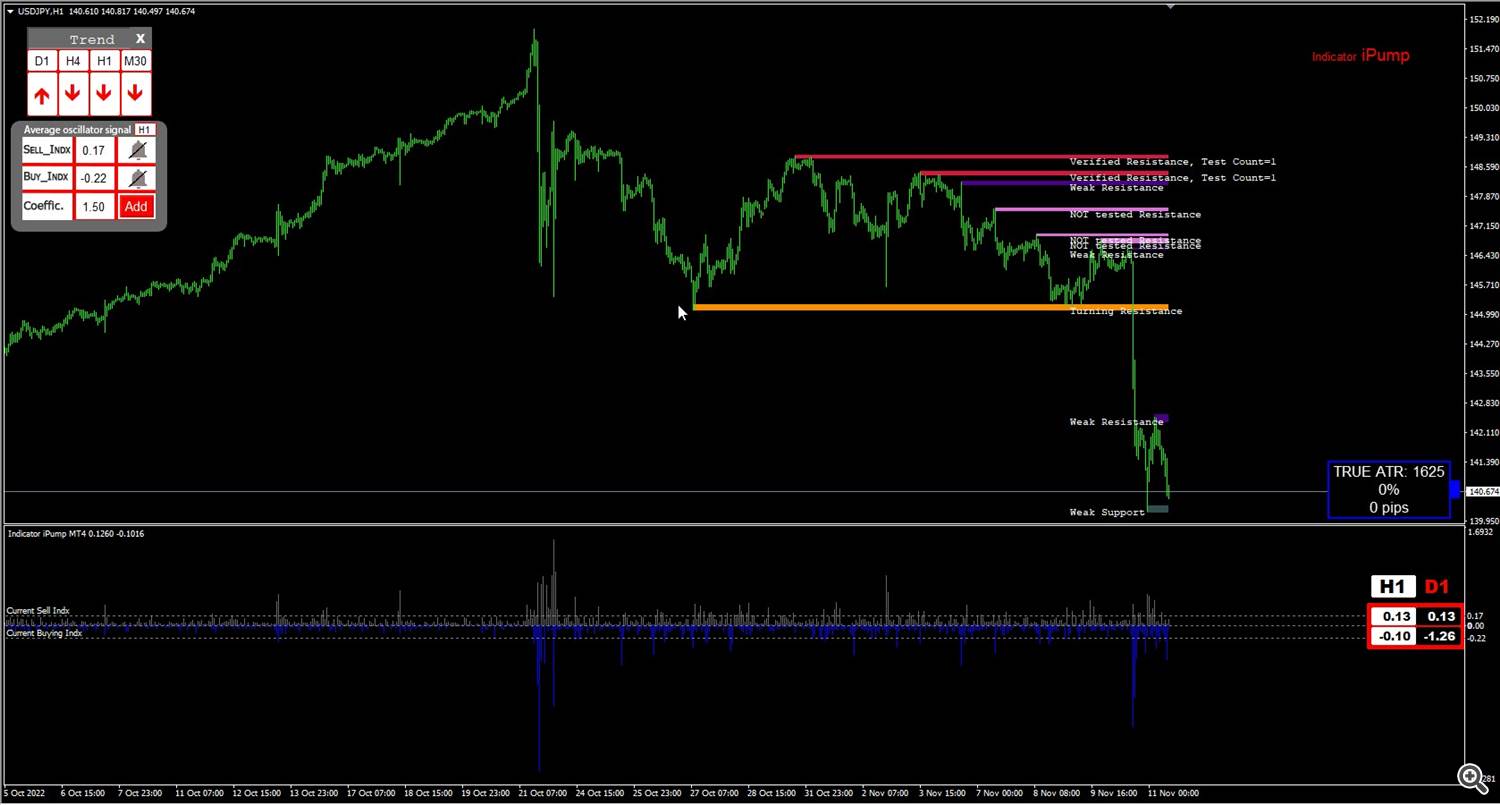 Gold prices are consolidating after active growth the day before, which led to the renewal of local highs since August 26. The XAU/USD pair is testing the level of 1750.00 for a breakout; however, the market activity remains reduced. The reason for the strengthening of “bullish” sentiment was the publication of the October report on inflation in the US. The data showed a slowdown in the annual rate from 8.2% to 7.7%, while analysts expected 8.0%, and on a monthly basis, the growth rate of consumer prices remained at the same level of 0.4%, while the market expected an acceleration of dynamics up to 0.6%. In turn, core inflation corrected from 0.6% to 0.3% on a monthly basis and from 6.6% to 6.3% on an annualized basis. Additional pressure on the American currency was exerted by statistics on the dynamics of Jobless Claims. The number of Initial Jobless Claims for the week ended November 4 increased from 218.0 thousand to 225.0 thousand, while experts expected only 220.0 thousand. The released data significantly reduced the likelihood of a continuation of the record tightening of monetary policy by the US Federal Reserve. Analysts are now almost sure that the interest rate will be increased by only 50 basis points in December, after which the regulator may take a wait-and-see attitude. 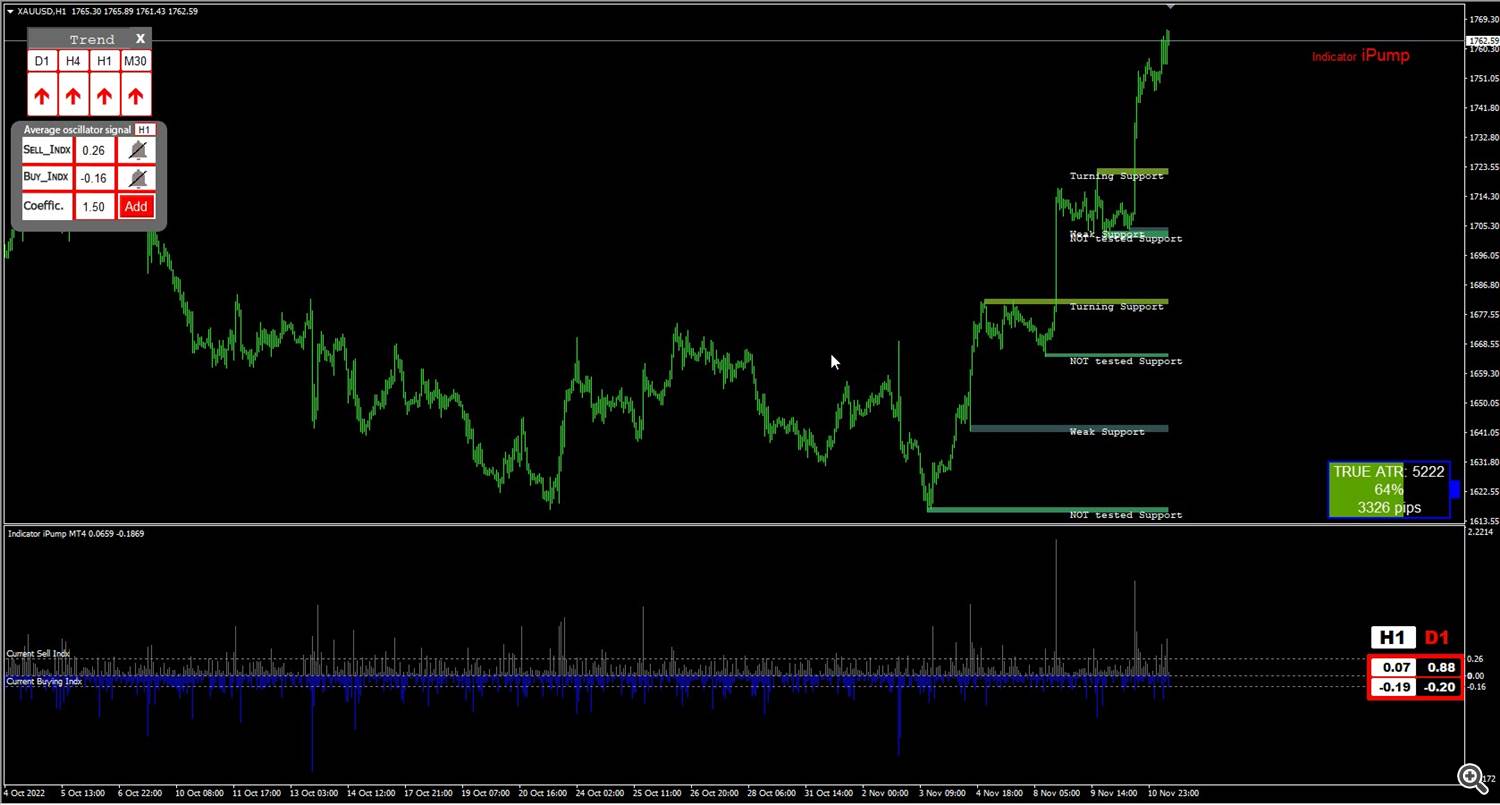 👉📈  The following indicators were used in the review

This is just a shortlist of really high-quality products that will improve your trading. Almost all products have MT4 and MT5 version/
A complete list of products was created by me by the link in the profile – https://mql5.com/en/users/batudaev/seller#products

Development and Inflation Fears Could Have Peaked: High Buying and selling Alternatives

Terrorist On Murderous Rampage Kills 7, Injures Others in Taking pictures...