Get Your Free AUD Forecast

The Australian Dollar was boosted during the week on a combination of a weaker US Dollar and a stronger-than-expected local CPI reading.

The US Dollar has seen some weakness due to the market looking for an end to the ever-hawkish Federal Reserve.

Treasury yields dipped after the Bank of Canada (BoC) raised their overnight lending rate by 50 basis points (bps), less than the 75 bp forecast. Earlier in the month, the RBA had also taken a dovish tilt when they raised the cash rate by 25 bps instead of the 50 bps anticipated.

This change in pace from other central banks had the market hoping for an end to the uber-hawkish stance from the Fed. This perception of a possible pivot on their monetary policy tightening regime has seen Treasury yields slide a bit lower, undermining the US Dollar.

On the domestic front, Australian CPI came in hotter than anticipated last Wednesday. Of particular concern is the increase in the RBA’s preferred measure – the so-called “trimmed mean”. Australian Commonwealth Government bond (ACGB) yields soared on the shock numbers but eased into the weekend in tandem with Treasury yields. 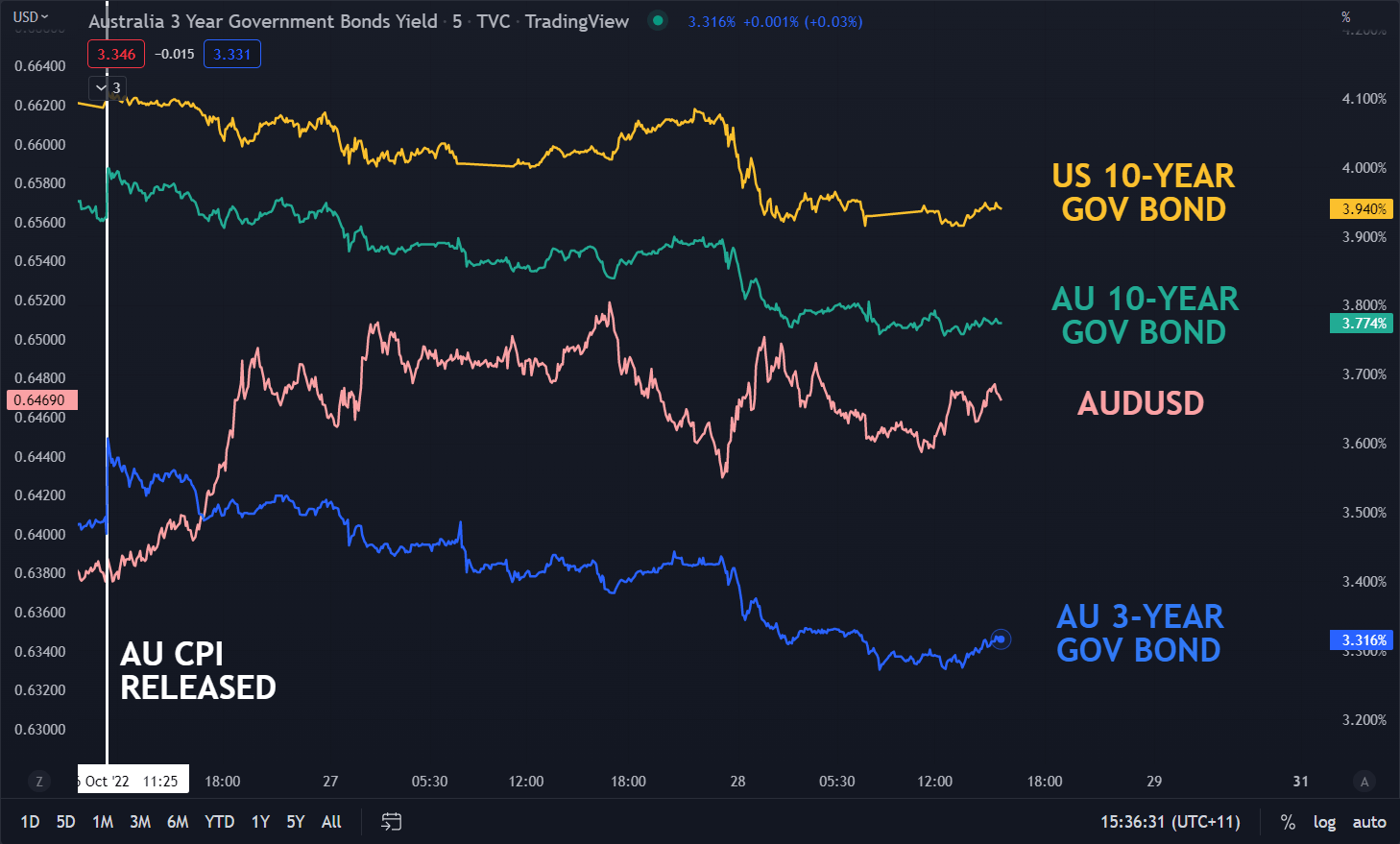 Headline CPI was 7.3% year-on-year to the end of the third quarter instead of the 7.0% forecast. The trimmed mean measure was 6.1% over the same period, rather than the 5.5% anticipated.

The RBA have said they expected inflation to reach 8% toward the end of this year before easing in 2023. A problem for this scenario is re-acceleration as shown in the quarterly breakdown.

The focus here is the trimmed mean quarterly number that leaped to 1.8% quarter-on-quarter for Q3, against 1.5% from the previous quarter.

There will be a change in the reporting of the CPI data point going forward whereby the Australian Bureau of Statistics (ABS) will provide a monthly update between reports of the quarterly figure, which remains the key inflation gauge.

Those monthly readings will include 62–73% of the basket that is used to measure the quarterly figure. More information can be found on the ABS website here.

In the region, China continues to present issues for Australia as growth there is starting to look somewhat anaemic in the aftermath of the Chinese Communist Party’s congress last week.

President Xi Jinping removed several senior members from the leadership group and replaced them with his loyalists. The concern for markets is that continued Covid-related lockdowns and crackdowns across several industries appear likely to continue.

Hong Kong’s Hang Seng Index (HSI) is at its lowest level since 2009, reflecting the unsettling scenario.

While the Melbourne Cup will be run and won this Tuesday, the focus for Australian financial markets on that day will be the RBA rate decision. A key question remains around their commitment to bring down accelerating inflation to avoid a policy error that other central banks have made and are now staring down jumbo hikes in cash rates.

You wish to change the entire world, however by no means yourselves!