The numbers are difficult to dispute. So far this week – which also happens to be the start of the month and quarter – ‘risk’ leaning assets have enjoyed a serious charge. For those with a long-only bias simply waiting for the cue for risk appetite to flip, the rally in price is more than enough. As for the more skeptical without a directional commitment going in (like myself), the rally is shrouded in serious skepticism. Between the seasonal norms for volatility and participation along with the unflattering fundamental backdrop, sustaining a bullish run looks to be a fraught course. In the meantime, the mania is intense and broad. For the S&P 500 that I consider an ‘imperfect but indicative’ gauge of risk trends, Tuesday’s rally of 3.1 percent registered as the single biggest session gain since May 18, 2020. When paired with Monday’s rally, the two-day advance notched an incredible 5.7 percent for the biggest 48 hour surge since April 7, 2020. And, this wasn’t the only sentiment measure to rally. The enthusiasm spread far with a steady measure of transmission. That said, we are still very early in mounting any deep recoveries. Looking further ahead, I believe that it could prove difficult to sustain the lift of bullish interest without a more tangible fundamental backdrop. Over the opening sessions of this week, there was little to really support optimism from the larger market participants. Remember, the market is not directly indicative of the sometimes basic perception of the retail trader. The majority of capital that flows through the system is controlled by groups such as central banks, large commercial banks and funds which tend to follow more traditional fundamentals. There has been very little from the calendar and headlines that would spur that crowd to moral authority on market course. In fact, the volatility seems to be conflict with warnings of recession, more aggressive central bank activity and even financial stability concerns ahead. There is serious to remain vigilant and many outlets for which to track that existential pressure. USDJPY is perhaps not the most indicative gauge to every ebb and flow in confidence, but the stakes are particularly high the pair. Interest rate differential and growth disparity favor a bullish view while the correlation to ‘risk’ is open for discussion. Yet, Japanese officials have essentially committed to fighting against pressure on the 145 at the risk of their credibility. For the moment, the range on this pairs is extremely tight, but that is likely a break risk for the foreseeable future. 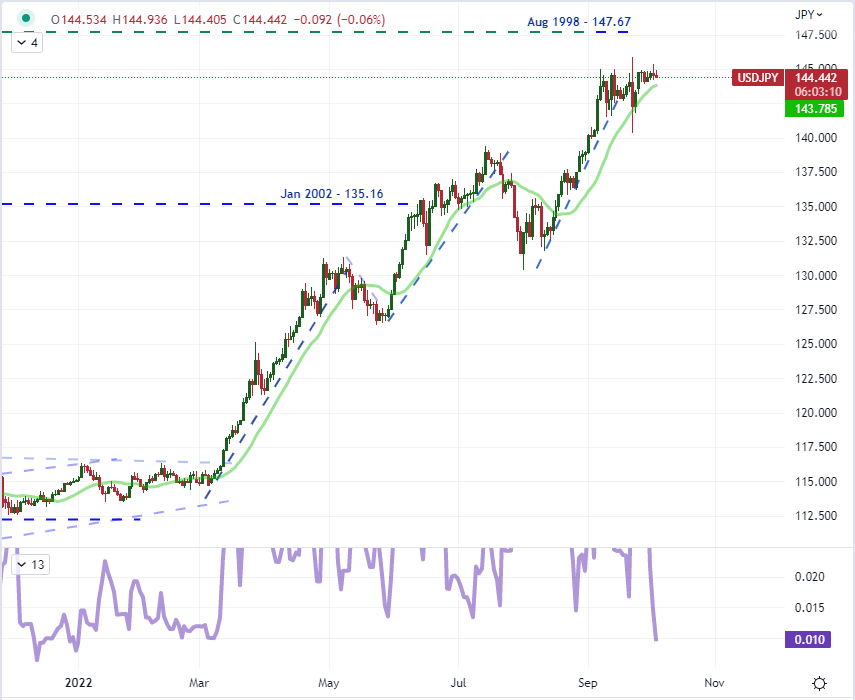 RBA, RBNZ and Fed Rate Speculation with Economics to Support

While my top focus remains on the ‘conditions’ around the market (participation, volatility, sentiment bias, etc), there is no denying the importance of fundamental trends that can rouse the masses. There are a few matters that should keep our focus. Interest rate speculation seems to be such a consideration. The Reserve Bank of Australia (RBA) announced Tuesday morning that is was hiking its benchmark rate by ‘only’ 25 basis points (bp) to 2.60 percent. The market’s response from the ASX 200 could be connected to the general climb in global sentiment, but the slack for the Australian Dollar can paint the picture on relative rate forecast. Is this still a top ‘carry currency’ when the Fed is outpacing it? Meanwhile, the Reserve Bank of New Zealand (RBNZ) has hiked its own benchmark 50 bp – as expected – to 3.50 percent. The Kiwi response was strongest…against the Australian Dollar. These are important milestones, but they do little more than undercut the role of two currencies that have earned participation among the largest currencies in large part due to their higher rate of yield. 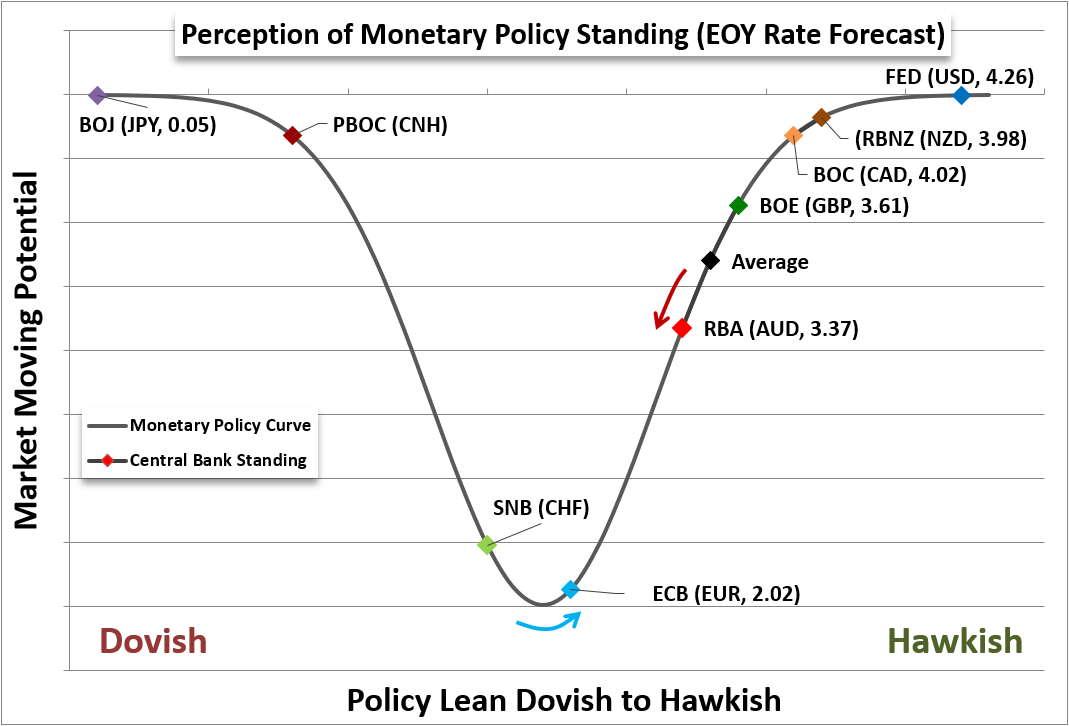 Chart Created by John Kicklighter with Data from ISM

Relative rate expectations is a matter for which I will continue to follow moving forward. That is also true of the Fed forecast where futures are currently pricing in a 67 percent probability of yet another 75bp hike next month. In the meantime, growth potential may also play a bigger role for a more macro aware crowd. This past session, we were digesting some troubling US labor data. The JOLTs August job openings figures dropped dramatically from 11.17 million roles to 10.05 million. This data point will raise serious interest around Wednesday’s initial jobless claims and the employment component of the ISM service sector report (which covers approximately three-quarters of US output and employment).

Chart of US Job Openings and Total Quits from JOLTs (Monthly) 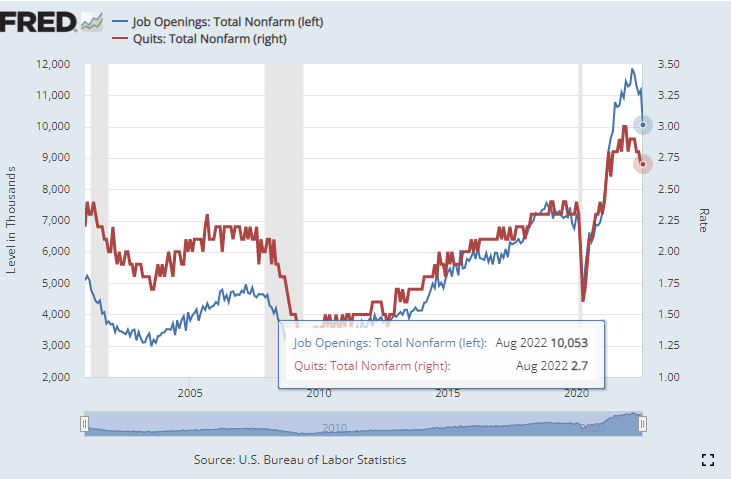 If we cast aside the ‘virtue by momentum’ view of sentiment moving forward, I believer there are some serious risks around the fundamentals sinking in for the worst. Setting aside interest rate speculation for a moment, economic health is a key matter through Wednesday’s session. That US service sector activity report from ISM is of particular weight, but it isn’t the only consideration. In the wake of the JOLTs figures, the employment component of the survey as well as the ADP private payrolls report for September are of serious consequence. It isn’t difficult for fear to start gaining serious traction on any strings of poor data showing that feeds into Friday’s NFPs. On a more global risk consideration, the IMF is due to host a live discussion on the WEO chapters on global economic conditions around inflation and climate policy in advance of the forecasts likely due next week. Beware the subtle warning of recession risks. 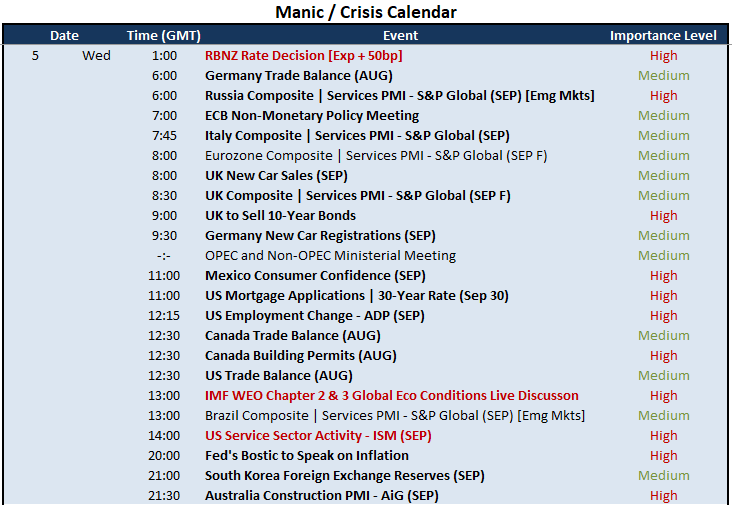 When it comes to the primary fundamental drive behind the financial system, there seems no better measure for distinguishing primacy than the US Dollar. The Greenback sits firmly at the crossroads of key market moving themes of relative rate forecasts, relative economic potential and general sentiment. For interest rate speculation, the Fed is still at the front of the pack for year-end and eventual-peak levels compared to its major peers. I am dubious of the United States’ ability to avoid a recession moving forward, but thus far it seems to be treated with some degree of reverences by international investors as cynicism sinks growth views for the likes of then United Kingdom. This is a bit more contentious. The leg of fundamental influence that seems to be more volatile at the momentum, though, is the currency’s safe haven status. The slide from the VIX (an inverse correlation to the underlying S&P 500) has registered an extraordinary 20-day and 60-day correlation between to the currency. These influences can shift in terms of top influence and alignment, but it makes the Dollar a useful gauge for the fundamental observer. 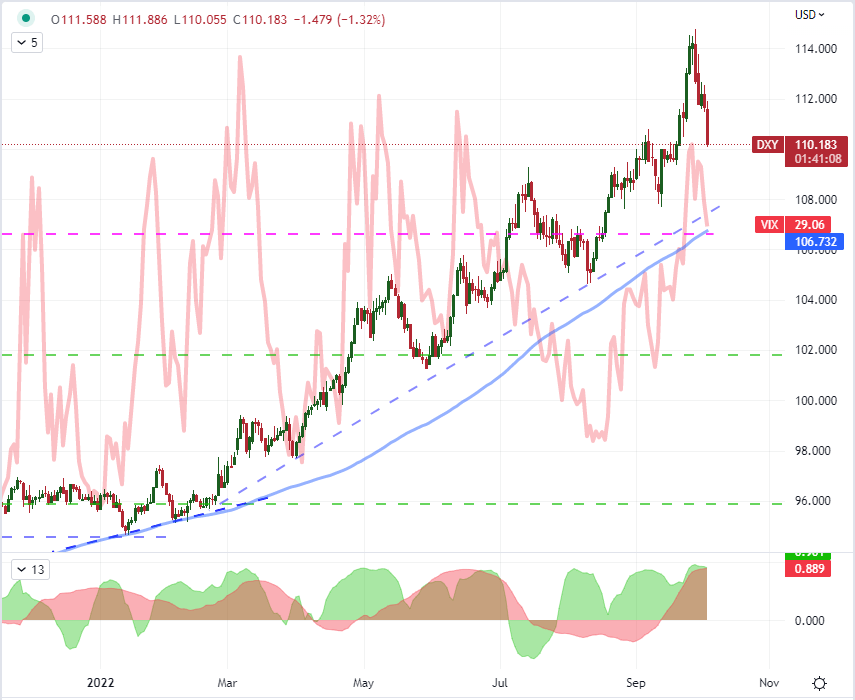 In the meantime, the rate of interest on US 30 yr mortgages simply hit...

Right here is likely one of the causes that they’re introducing...