EURUSD surrendered parity once more with the pair falling some 80-odd pips in European trade. Following another bullish day for the Euro as risk assets rallied, a breach above parity seems unsustainable. The recent rally for the pair seems more in line with broad dollar correction and hopes of a Fed pivot come on November 2.

Despite the recent upbeat nature of European markets, today’s PMI confirmed the steepening drop in business activity last month which underlines the challenges ahead for the zone. The decline in activity coupled with signs of deteriorating inflation could put to rest any hopes of the Eurozone avoiding a recession. Signs of deteriorating inflation were evident in composite input and output prices which rose aggressively. The input price PMI gauge rose from 72.3 to 77.1. Given the above, there does not seem to be any material change to the outlook for the zone, at least none that would warrant a sustained EUR/USD push above parity. 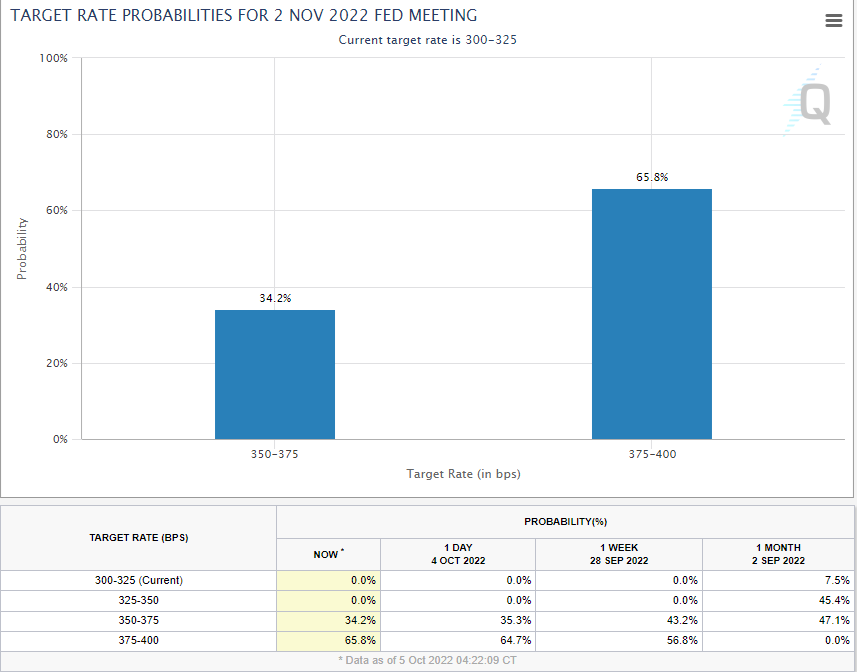 Chatter Around a Potential Pivot by the US Federal Reserve Cools

Much of the week’s risk-on rally can be attributed to the idea that the US Federal Reserve may soften its stance heading into its November meeting. Those who have been arguing for a fed pivot point to this week’s ISM data, the RBA rate hike, Bank of England and overall market stability. These events cannot be seen as irrelevant, however, it doesn’t seem enough for the Fed to pivot at this stage. We can see the expectations for the Fed’s November meeting with markets now pricing a 65.8% chance of a target rate between 375-400bp compared to a 56.8% chance a week ago. This has also increased by a modest 1.1% from a day ago an indication that expectations of a Fed pivot might be cooling.

The Eurozone calendar remains quite light today with no scheduled central bank speakers either. All eyes will be fixed on the US session with the ISM Non-Manufacturing PMI taking center stage. A weaker-than-expected print could see a rally back towards parity in what could be the case until Friday’s all-important Non-Farm Payrolls (NFP) data release.

From a technical perspective, we have seen a 470-odd pip rally since the YTD lows without any significant pullback. Given the speed of the rally, there remains every chance for a deep pullback as we trade some way away from the moving averages.

The steep trendline on H4 chart above is an indication of the momentum behind the recent rally. A pullback to retest the ascending trendline which coincides with the 20 and 100-SMA may provide support which could result in one more push to parity or higher as we approach Friday’s NFP release which looks likely to result in a continuation of dollar strength. A break above parity before Friday could be facilitated by weak ISM numbers today or the ADP numbers tomorrow in which case the trendline around the 1.005 area could provide the resistance required to push the pair back below parity once more.

Whether you are a new or experienced trader, we have several resources available to help you; indicators for tracking trader sentiment, quarterly trading forecasts, analytical and educational webinars held daily, trading guides to help you improve trading performance, and one specifically for those who are new to forex. Spectacular Rally Places Bitcoin Above $24,000, However Is $28,000 Nonetheless Attainable?

Pence Says Trump Ought to Apologize For Dinner With Nick Fuentes, Kanye – Conservatives...

Why Funding Big Constancy May Permit Bitcoin Buying and selling