Most Read: Top 5 Emerging Market Currencies & How to Trade Them

Brazil will hold this Sunday, October 2, one of the most politicized presidential elections in recent times. Former President Luiz Ignacio Lula da Silva is expected to comfortably defeat current President Jair Bolsonaro, although he may not receive enough support to avoid a runoff. Under Brazilian law, a presidential hopeful must obtain more than 50% of all valid ballots to claim outright victory, otherwise the two candidates receiving the most votes must face each other in a second round.

The latest opinion polls place Lula at the head of the race with 46% of voting intention, compared to 34% for Bolsonaro. In a ballotage, which if necessary would take place on October 30, Lula’s hypothetical lead widens to 14 points over the incumbent, indicating that left-wing leader may be on the verge of returning to power.

HOW WILL MARKETS REACT?

Traders are currently assessing how next Sunday’s elections will affect the Brazilian real and Brazilian equities. To address these questions, it is important to underscore a few points.

When a sitting president is up for re-election, investors tend to prefer political continuity, as a new government could bring about radical change, creating uncertainty and disrupting markets. This is especially the case if the challenger supports a left-wing, interventionist agenda that may scare away foreign capital and compromise debt sustainability.

Does this mean that markets will convulse if Bolsonaro loses his bid for a second term and Lula, who appears to endorse fiscal largesse and a stronger role of the state in the economy, is voted in? Not necessarily, in fact, polls showing Lula’s sailing to victory have not spooked Wall Street whatsoever, with most investors taking the news in stride.

In support of the above assertion, one need only look at Brazil’s 5-year credit default swaps to gauge sentiment in the face of the changing political landscape. This CDS stood at 242 bp earlier in the week, down sharply from this year’s high of 310 bp set in July. 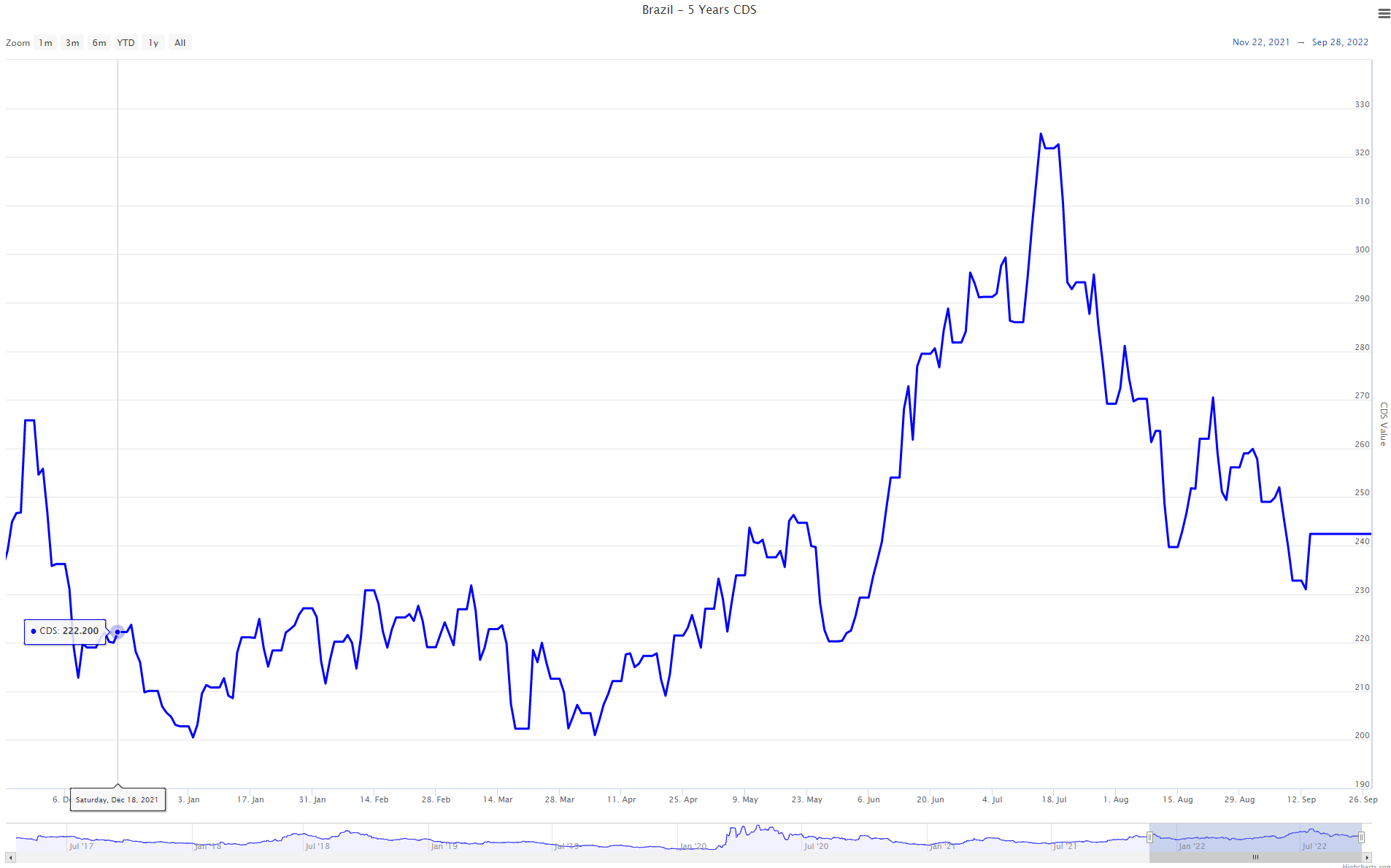 If concerns about the fiscal outlook due to potential policies of the next administration were elevated, insurance against counterparty insolvency risk would be trading at higher levels, as is often the case in emerging markets. The Brazilian real would also be a lot weaker against the U.S. dollar, but that has not happened, with USD/BRL down about 3% year-to-date despite the broad EMFX selloff.

These developments suggest that investors have warmed up to the idea of Lula’s political comeback. For context, during his two terms in office, the country’s economy grew about 4.5% per year on average, public debt was reduced from 60% to 40% of GDP, inflation was slashed by two thirds, and the unemployment level halved, ultimately lifting more than 20 million people out of poverty. Though these achievements are commendable, perhaps none of this would have been possible had it not been for the commodity boom during those years, which boosted the exporting nation’s fiscal coffers.

In any case, Lula proved to be a pragmatic leader, at least during his first four-year tenure, ruling with predictability and stability while avoiding rash and radical decisions that often come back to haunt left-wing governments in South America (ask Argentina). For most of his presidency, the local stock market surged (except during the global financial crisis), with Ibovespa up more 1200% from 2003 to the end of 2010 (in US dollar terms). Sovereign debt prices also soared amid fiscal prudence, delivering double digits returns to bondholders who bet on the government.

Famous investor Mohamed El-Erian once wrote an op-ed piece on Bloomberg, praising Lula’s administration for his accomplishments, noting that “current and future generations of Brazilians will remember their popular president for far exceeding even the most optimistic expectations about what Brazil could achieve in terms of economic, financial and social progress”. 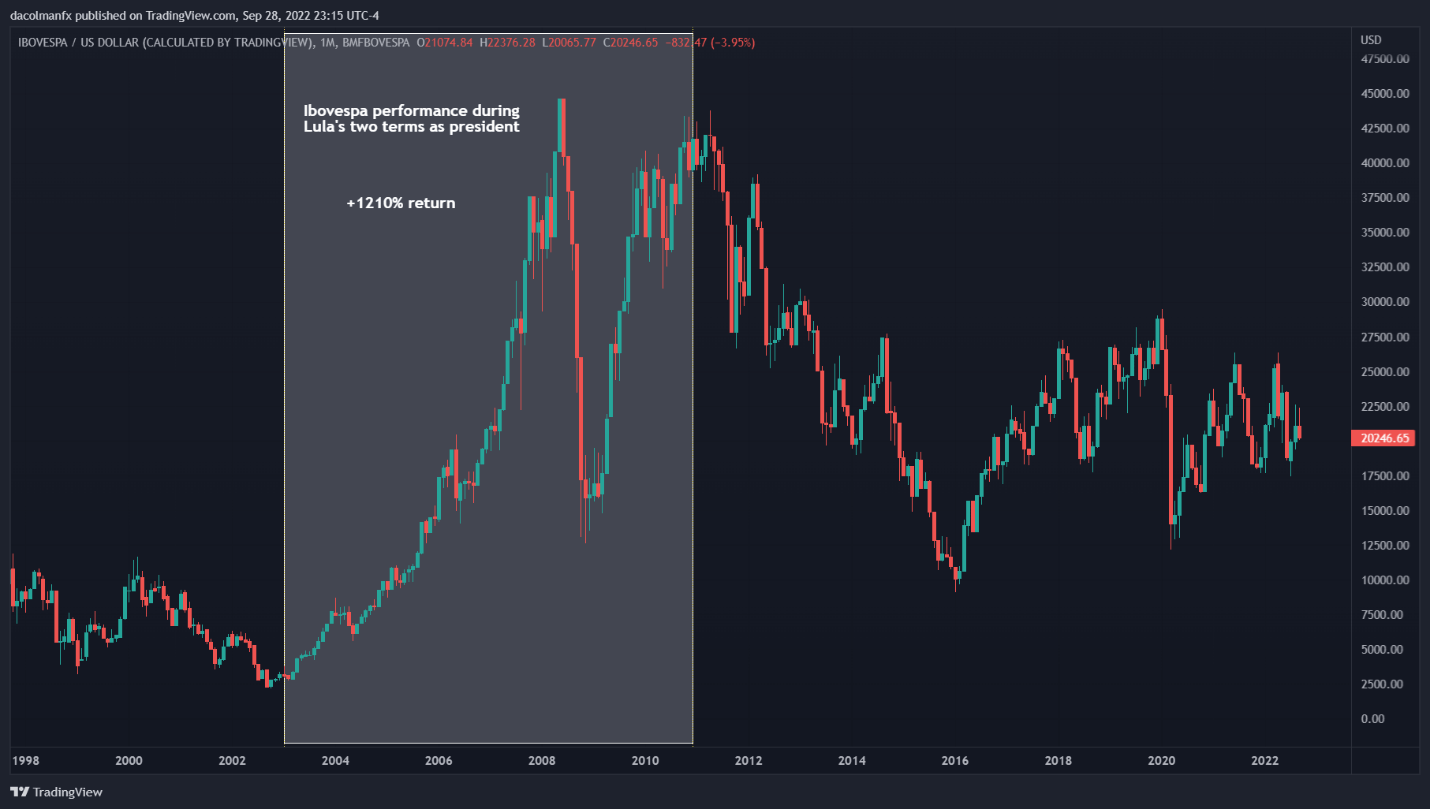 As mentioned before, the most likely outcome is a win for Lula, perhaps not in the first round but in the runoff. His comeback should be mostly positive for Brazilian assets at least initially during the honeymoon period before large legislative initiatives are considered. This means that the Brazilian real could appreciate against the U.S. dollar as it happened during the first six months of the year, but risk-aversion and turbulence in world financial markets may cap gains; after all BRL is still an emerging market currency sensitive to global trends.

Equities are also well positioned to command strength, although global recession prospects are a threat to the bullish thesis. However, if conditions stabilize, Brazilian stocks could take advantage of “higher for longer” commodities prices. With inflationary pressures easing, there is an increased likelihood that the central bank could begin to ease monetary policy in 2023 after delivering 1115 basis points of tightening since 2021. This should also be a tailwind for risk assets.

Furthermore, stocks look incredibly cheap in terms of valuations, with Ibovespa trading at a NTM P/E ratio of 6.8x, significantly below the 10-year historical average of 11.2x. For traders in the U.S. who are interested on betting on the Brazilian stock market, the EWZ exchange-traded fund can be a close proxy for Ibovespa.

Although the likelihood of a Lula government increasing spending to expand social safety net plans could jeopardize long-term debt sustainability, Congress could provide “checks and balances” in the legislative process, preventing fiscal risks from exploding. 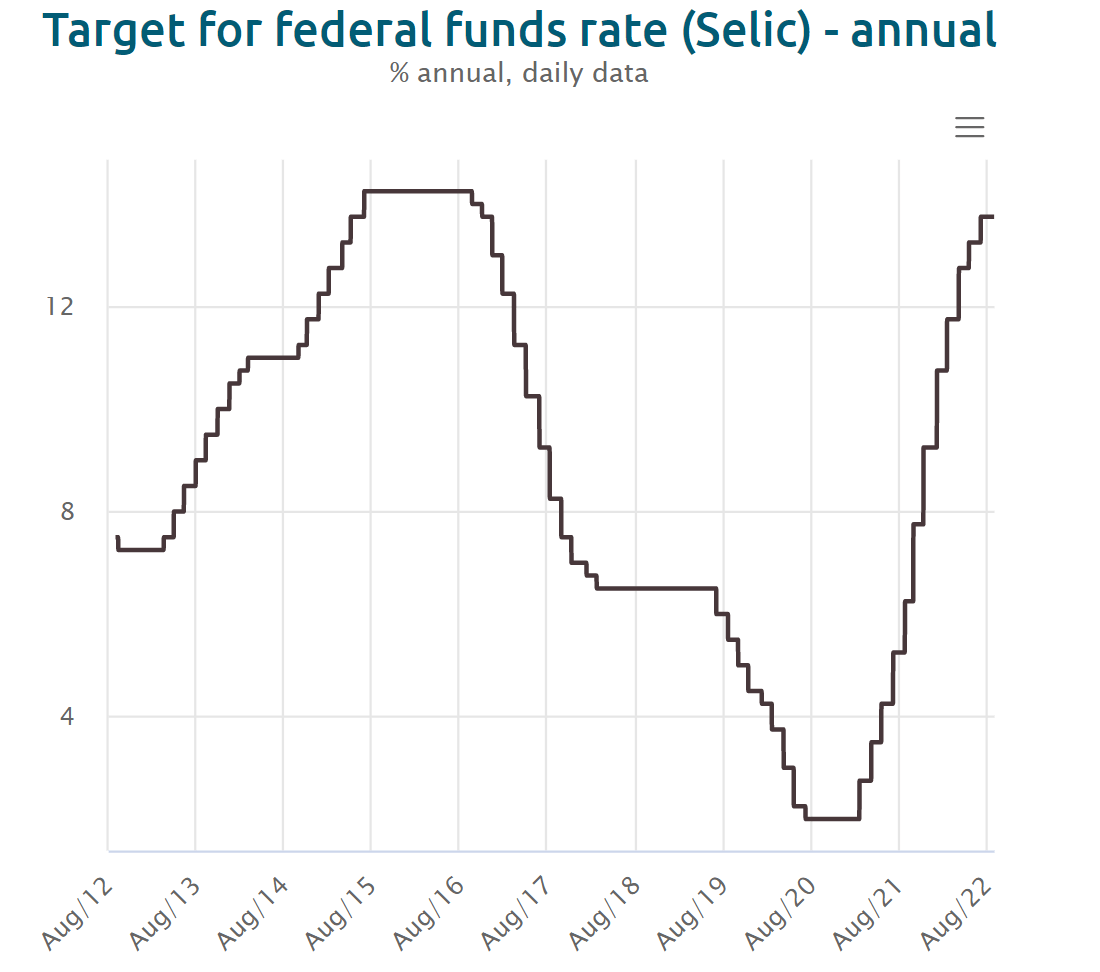 Latin American political polls have been very inaccurate, so traders should not completely rule out a scenario in which Bolsonaro is re-elected. Under this assumption, there would be little change in the current market trajectory, but Brazilian assets could stage a solid rally as political risks around electoral uncertainty dissipate.

The main risk for markets is a contested election in which Lula wins by a very narrow margin and Bolsonaro refuses to accept defeat, blaming the results on fraud and calling on his supporters to take to the streets to fight the establishment. This scenario trigger social unrest and violence, fueling volatility and possibly a sharp sell-off in Brazilian assets.

In recent months, Bolsonaro has sought to undermine confidence in the integrity of the electoral system without presenting any evidence, threatening not to recognize the election outcome unless he is declared the victor. His rhetoric has led many analysts to speculate that he may attempt a coup if he loses, creating a constitutional crisis in South America’s largest democracy.

While recent events around the world show that anything is possible, Bolsonaro appears to lack the institutional support necessary to prevent the opposition from taking power. Moreover, although he retains military support, several senior members of the armed forces have said they will respect the certified result, whatever happens, reducing the likelihood of a successful coup.

Chart Sample Detection on A number of Timeframe – Buying and selling Methods –...

Easy methods to Handle Worry and Greed in Buying and selling