The Euro is staring down a 20-year low against the US Dollar as a combination of Fed and White House rhetoric pull the pin on a change to circumstances for markets.

Overnight, St. Louis Federal Reserve President James Bullard reiterated the determination of the Fed to stare down price pressures when he said, “There’s a lot of tightening in the pipeline,” and “we have a serious inflation problem in the US.”

He went on to invoke the spirit of Paul Volker and highlighted that there were 4 recessions over 13 years in the 1970’s and early 80’s. This was due to the high and volatile inflation that was eventually reined in by Mr Volker.

His hawkish comments were supported by the other Fed board members Evans and Kashkari. All this rhetoric has lifted Treasury yields to levels not seen in decades in some parts of the curve. The 10-year note went above 4% for the first time since 2008. Developed market government bond yields globally are following the move north.

White House economic advisor Brian Deese doesn’t see a Plaza accord type agreement, hosing down speculation of any form of currency management from the administration.

EUR/USD broke below Monday’s low and has traded under 0.9550 while GBP/USD is also eyeing lower levels going into the European day.

The Euro situation has been exasperated by the potential sabotage of 3 Russian gas pipelines, sending prices higher.

The International Monetary Fund has lambasted the UK government’s fiscal stimulus measure announced last Friday and over the weekend. The Bank of England Chief economist Huw Pill stated that the fiscal policy will require an appropriate monetary policy response.

The Chinese Yuan was allowed to trade at levels not seen since 2008 against the US Dollar.

Australian retail sales came in at 0.6% for the month of August, a beat on the 0.4% forecast but it didn’t stop AUD/USD from making a fresh 2-year low.

USD/JPY is nudging toward 145 again and the market will be awaiting any intervention from the Bank of Japan.

In the risk-off environment, APAC equities have taken a bath following a benign lead from Wall Street. Futures are pointing to a soft start to the North American cash session.

Crude oil is steady with the WTI futures contract near US$ 77.50 bbl while the Brent contract is a touch under US$ 85.30 bbl. Gold remains anchored around US$ 1,625 an ounce.

The US will see mortgages and inventories data but the central bank speakers will again be in the spotlight. The focus will be on Fed Chair Powell’s remarks.

EUR/USD made a new 20-year low today smashing below several support levels while remaining in a descending trend channel.

The lower band of that trend channel may provide support. On the topside, resistance might be at the break points of 0.9864 and 0.9945. 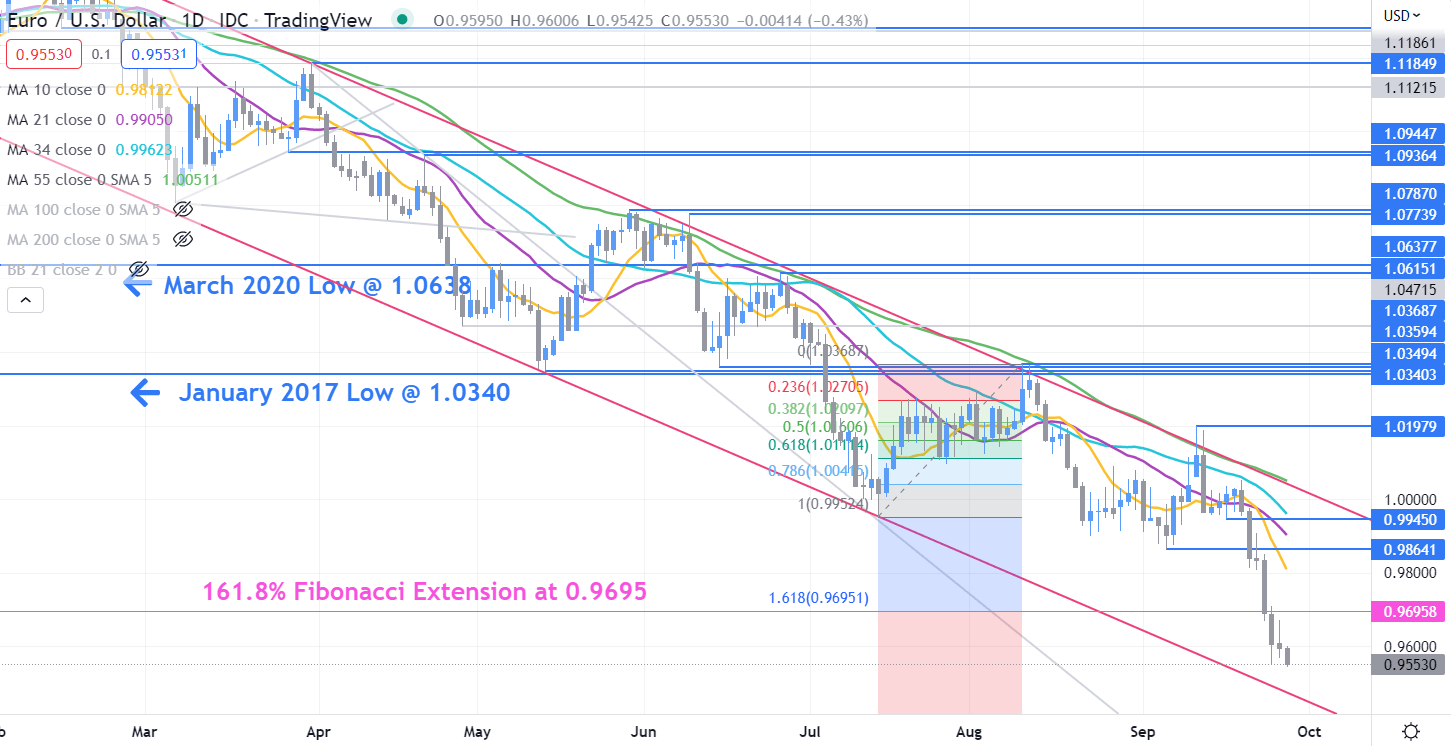 XAU/USD have easy street to $1,900 as US PCE Inflation, Fed loom – Confluence Detector

“The Man Who Showers With His Daughter Is Telling You You are a Unhealthy...

If what Ye was saying wasn’t true, then why would all his stuff be...

PAUL JOSEPH WATSON: We Had been Proper