We were off last week after an abnormally quiet week in sports and crypto; not to worry, we’re back in the mix this week with some of the latest headlines and activity across the sports, crypto and blockchain landscapes. From athlete projects, to team and league partnerships, to new blockchain-based platforms, we look to cover everything that happens across sports and crypto.

Let’s take a look at all of the past week’s biggest stories.

Sorare has been on fire lately, securing a major league deal with the NBA in recent weeks to join their two existing major U.S. league deals. Sorare is keeping their foot on the gas in other regions as well, as Liverpool FC announced last week that they were deepening their existing partnership with Sorare.

It’s unclear exactly what that will look like, but the release points forward to “multimedia fan content and… new unique experiences.” The platform now offers all of the Reds players as collectible NFTs. Sorare is a French-based firm that has seen an abundance of European football partners, and has recently shown investment in building it’s book of U.S.-based business as well.

Tom Brady isn’t the only one scoring points this month, despite the NFL season kicking into gear. The Brady-led Autograph scored big the past week with a new league-wide deal with the PGA Tour. As we covered in recent days, revenue splits with players are expected – an apt move considering the pressure that the LIV Golf property is looking to apply.

Autograph continues to find strong established partners in it’s early stages – the firm’s roster of founders across practically every sport makes for a strong pitch for the platform’s future.

AC Milan has secured a new official ‘NFT Gaming Partner’ this past week after signing on Solana-based football game, Monkey League. The game is one of the increasing fantasy-style NFT-powered games, which means that game players can expected to see branded in-game AC Milan assets. The first mint between the two will be launched October 6 on MagicEden. 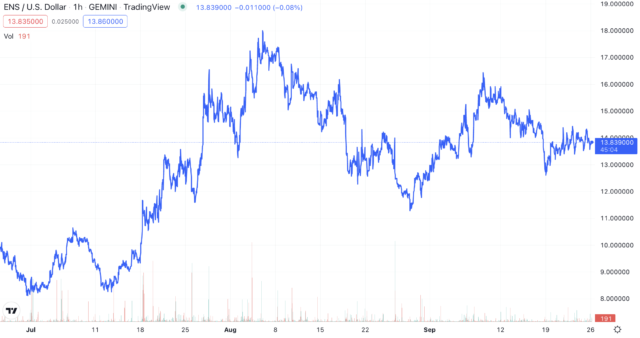 Kraft Sports + Entertainment secured a new partnership with Chain this past week, which will come to life through Kraft’s umbrella properties, including the NFL’s New England Patriots and MLS’s New England Revolution. Chain operates predominantly around blockchain infrastructure and blockchain-related services under a SaaS model; in our report, it was rumored that the four-year partnership also included the Patriots purchasing ENS domain ‘patriots.eth’ for $75K.

It was later confirmed and reported that the Chain CEO Deepak Thapliyal purchased the domain, at a price tag of $99K. It’s a suitable response given that the partnership is a first for Chain when it comes to sports partners.

NFT platform Rario continues to snag market share of cricket partnerships. We’ve called out the platform a few times in ‘The Sports Slice’ during it’s tenure, and the project is back in the headlines this week after securing another official talent partnership – this time with Indian ODI player Prasidh Krishna.

Hasbro is rebooting it’s former ‘Starting Lineup’ toys, with new developments over recent days. Except this time, they’ll include NFTs. LeBron James, Steph Curry, Giannis Antetokounmpo and more of the NBA’s biggest stars will be featured as six-inch figurines that will retail for $50 each.

The collectibles were last seen in the 1980s and 1990s, so they’ll be back with a 2022 web3 twist: an NFT with each purchase. Randomly-assigned rarities (including just one gold NFT per player) will be sold and will operate on Panini’s blockchain infrastructure.

Hasbro hasn’t shied from NFTs, utilizing them already with IP properties such as Power Rangers, and partnering with web3 properties like NFT project ‘World of Women’ for a custom Monopoly game.

What Sorts of Bonuses do On-line Crypto Casinos Provide?

Japanese Researchers to File Lawsuit Towards Japan Authorities for Overlaying Up...