UPDATE: BBBY stock crashed 41% in its second day of mayhem. With both former booster Ryan Cohen and new meme stock star Jake Freeman cashing out of their near 18% combined stake earlier this week, the rest of the retail crowd has decided to follow suit. Shares are trading at $10.85 one hour into Friday’s session, and the company is now once again worth less than $1 billion. The news of Bed Bath & Beyond hiring a law firm known for bankruptcy proceedings has also hurt sentiment around BBBY. About 6,200 call contracts for the $20 strike price expiring on August 26 have traded so far in the session. The price of these calls has collapsed 89% overnight to $0.41 a share.

Bed Bath & Beyond (BBBY) came crashing back down to earth on Thursday as investors bailed on news of activist investor Ryan Cohen’s RC Ventures selling its entire stake in the firm. BBBY stock has reignited the retail trading frenzy this month with some eye-watering gains. BBBY stock was up over 500% for August before this meltdown.

Much to digest here. The retail frenzy was reignited by the supposed dovish pivot from the Fed which caused a rally in risk assets and equities. Retail came flooding back in and returned to some old favorites, namely Bed Bath and Beyond. The frenzy was further added to when RC Ventures’ Ryan Cohen purchased some deep out-of-the-money options causing a good old-fashioned gamma squeeze to add to the more favored narrative of a short squeeze. A gamma squeeze is the number of underlying stock options market makers have to buy to hedge their option position.

The more a stock goes up the more market makers have to buy to remain hedged.

Now the converse is in play they will all be dumping the stock. An interesting side story emerged also this week, that of a 20-year-old college student making some eye-watering gains from BBBY trading. There has also been much discussion as to whether the short swing rule applies to these sales. To the best of my knowledge, it will not apply. The short swing rule basically states that any profits resulting from transactions carried out by an insider or director, and/or over 10% holder will go to the company if done within a 6month period.

When RC Ventures announced their stake it was 9.8%, so under the 10% threshold for the short swing rule. Yes, it did grow based on share buybacks but I do not think that is applicable. I could be wrong but that is my view. Also, a decent chunk of the purchases was made in January and February and so it is outside the 6-month window for the short swing rule to apply.

Finally, the gains made would not rescue Bed Bath & Beyond, as some have mentioned. The gains from the trade are in the region of $68 million. BBBY needs a lot more than that to survive. It has debt and liabilities of nearly $5 billion. $68 million is a drop in the ocean of debt.

On that note, the story twisted further on Thursday as Bloomberg reported that top debt restructuring and bankruptcy lawyers Kirkland&Ellis. Bloomberg Law recently said, “Kirkland has been the busiest law firm in major Chapter 11 cases over the last few years, earning more than $200 million in pre-petition filing fees for such cases in 2020, the last busy year for bankruptcy lawyers”.

So, this is not good news for BBBY holders.

Unfortunately, this one was well flagged when the intent to sell filing was publicized. In my view, one doesn’t file such notice unless you have some conviction and so it played out. The bizarre reaction in BBBY stock moving up 500% despite terrible earnings should also have been a flag.

Yes, this worked well with AMC and GME in 2020 but this intention filing was the exit flag unfortunately it was not followed up on by many retail traders who have now been badly stung. Now, the situation looks worse in my opinion.

BBBY stock traded down to $5 after recent earnings. Now things are worse, the major shareholder has dumped the stock. Also getting less attention but the CFO also sold a nice amount, 55,013 shares @ $25.52. To be fair it would be too tempting not to take advantage of sky-high valuation levels for BBBY. So earnings were terrible, a major shareholder who was looking for board seats and transformative action has exited and the firm has hired lawyers known for debt restructuring. BBBY debt is trading at 50 cents on the dollar according to Bloomberg. The sentiment is now terrible. So it looks like a return to $5 and below is on the cards. Debt restructuring likely means dilution of some form, capital raise, or even worse a chapter 11.

BBBY stock is also a mess technically speaking. The gap down to $8.33 is sure to be filled and from there $5 at least offers some volume-based support. Hard to find anything positive here but that does not mean another squeeze could happen. Unlikely as repeat tricks are harder to do especially with the whole world watching and plenty still stuck long from higher levels. but technically above $17, there is less volume-based resistance. 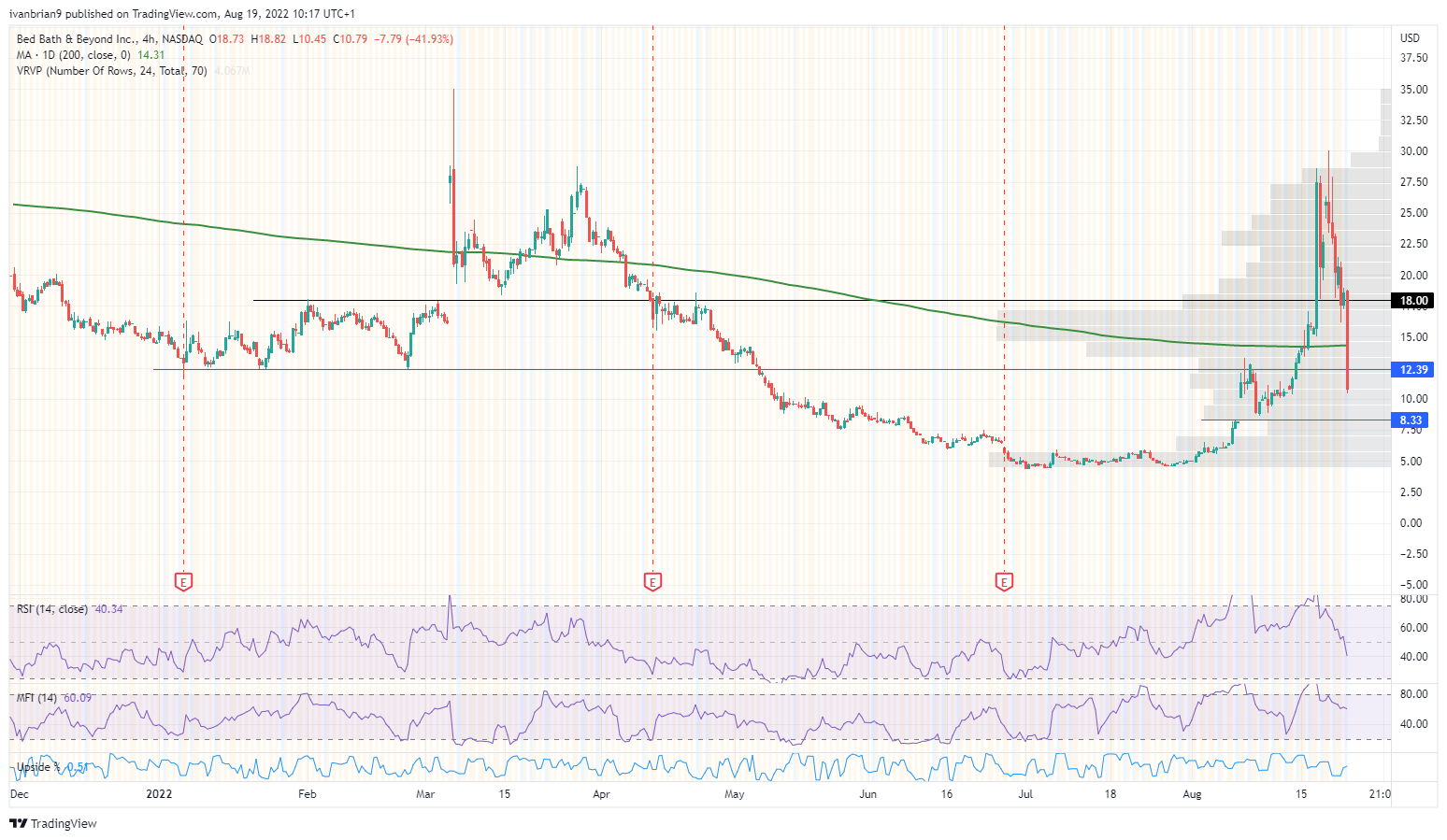 *The author is short BBBY and long $23 puts.

EUR/USD resumes the draw back and targets the 2022 low