The steady move higher since printing the low in June has been met with very little resistance – particularly at a time when Q2 corporate earnings were announced with varying degrees of ‘success’.

Nevertheless, the S&P 500 advanced through earnings season with very minor dips along the way but now we wait to see how the market will react when faced with a rather significant zone of resistance.

The zone of resistance comprises of the 200 simple moving average (SMA), the descending trendline and the 61.8% Fib retracement (4361.50) of the 2022 major move. The first of the three elements, the 200 SMA appears to have repelled higher prices as trading is down prior to market open, now testing the uppermost side of the pitchfork – with the potential to trade back with in the pattern.

In addition, the RSI reveals that prices appear to be recovering from overbought levels, which could signal lower prices in the coming sessions if a deeper retracement take should from here. One thing to be aware of in the meantime is the MACD indicator – which is a measure of momentum among other things – as there is no indication of a slowdown in the upside momentum (i.e. bearish crossover). The nearest level of support coincides with the pitchfork, followed by the 50% Fib retracement. 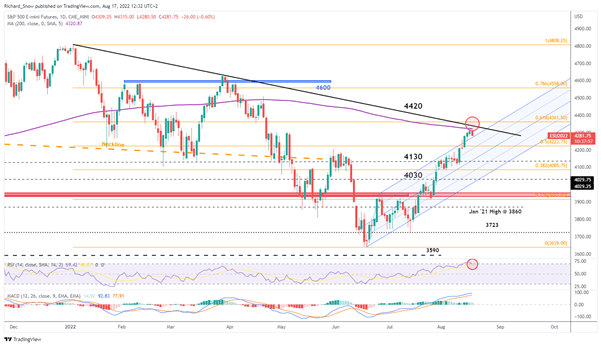 There has nearly been a 19% recovery from the June lows, suggesting this could be more than a bear market rally. However, the longer-term descending trendline still caps upside trend momentum and therefore traders ought not to discount a lower move from here especially of the significant zone of resistance proves too much to break above.

IG client sentiment reversed at the end of July as the US 500 achieved a series of higher highs and higher lows. The index has risen another 4.5% since then which has resulted in an acceleration of the number of short traders over long traders. Shorts now account for just under 70% of IG client positioning, which suggests the bull rally may indeed continue, however, changes in recent sentiment complicates the matter (see below).

US 500 with IG Client Sentiment Overlay 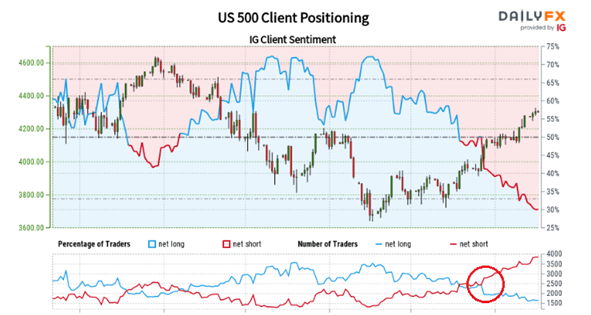 “There Have Been a Spike in Homicides That Has Nothing to do With Democrat...