JOIN OUR LIVE COVERAGE OF THE BANK OF ENGLAND DECISION

SUMMARY: The main question heading into the Bank of England’s monetary policy meeting is whether the MPC sticks with a 25bps rate rise or adopts a more aggressive 50bps hike. As it stands, money markets are near enough fully priced in for a 50bps rate. This stands in comparison to economists polled, where the split is 70/30 in favour of a 50bps hike, which is also similar to how FinTwit responded to our poll. As a reminder, at the previous meeting, the BoE altered its guidance, stating that it would “act forcefully” in response to more persistent inflationary pressures. Therefore, signalling openness to a larger rate increase. 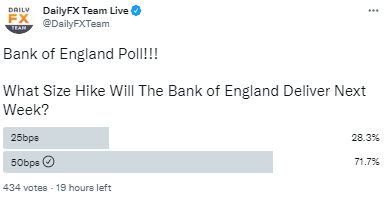 DATA: Inflation has continued its upward trajectory, as expected, with the headline rate rising 0.4ppts to 9.4% since the June meeting. However, while core inflation has since fallen 0.4ppts to 5.8%, the government and the BoE for now, remain laser-focused on headline inflation. Elsewhere, PMIs and GDP have been relatively resilient since the prior meeting, thus slightly reducing those growth concerns from the BoE’s perspective and further endorsing the view that the Bank will hike 50bps.

Vote Split: Alongside the decision itself, the vote split will be closely watched. A 9:0 vote in favour of a 50bps would be the most bullish outcome for the Pound, however, with little commentary from the most dovish member on the MPC, Silvana Tenreyro, it is hard to gauge whether the decision is unanimous. Therefore, there is a good chance the vote split would be 8-1. Anything less, for example, a 6-3 in favour of a 50bps, would ultimately be a negative for the Pound. Keep in mind, that this will be Michael Saunders’s last meeting, who is the most hawkish on the MPC and will be replaced by a dovish member.

RATE OUTLOOK: Within the monetary policy report we will see the latest inflation & growth projections based on the implied market path. A reminder that in the May MPR, the BoE saw inflation over the forecast horizon falling to 1.3% based on rates going to 2.5%. As it stands, money market pricing sees the terminal rate closer to 3%, which appears far too aggressive, setting the bar high for the BoE to deliver a hawkish surprise on the commitment to additional rate hikes. Leaving the Pound at risk of a dovish repricing.

MARKET REACTION: Overall, I lean towards a 50bps hike, which could prompt a knee-jerk reaction higher. My view is that the BoE will disappoint hawkish expectations regarding additional rate hikes that have been priced in. As we have seen previously with the RBA this week, a larger than normal hike is not a guarantee that gains in the currency will be sustained, much depends on the outlook regarding future rate hikes and with the BoE concerned about the growth outlook, the bar is high for them to provide a hawkish surprise. What’s more, the reaction to the majority of the BoE’s meeting has been one of a hawkish disappointment, with GBP/USD on average falling 0.24% in the first 30 minutes. According to options market pricing, the implied move for GBP/USD is 0.77% or +/- 94pips, which from the current price of 1.2170, implies a 1.2076-1.2264 range.

Pound’s donwside not over but – MUFG

Pound’s donwside not over but – MUFG