The Organization of Petroleum Exporting Countries (OPEC) and its extended cartel associates (collectively known as OPEC+) will be convening on August 3rd. Crude oil prices may rise as policymakers consider output levels, the outlook for demand, and their own economic concerns against a backdrop of geopolitical tension between the West and Russia.

OPEC+ MEETING AHEAD – WHAT TO EXPECT?

According to OPEC+ sources, the cartel is tilting towards maintaining current output for September at 43.8 million barrels per day (mbd). Having said that, a moderate increase is on the table. For August, the total required output for OPEC+ was marked at approximately 43.8 mbd, with Saudi Arabia and Russia as the biggest producers, putting out 1.10 mbd each.

This decision came after the June meeting where officials decided to increase output by 0.648 mbd (648,000 barrels per day). Many producers are already struggling to meet production quotas, and consequently, it will be difficult to raise output. This has been due to supply disruptions by sanctions, geopolitical instability, power outages, and other assorted factors. 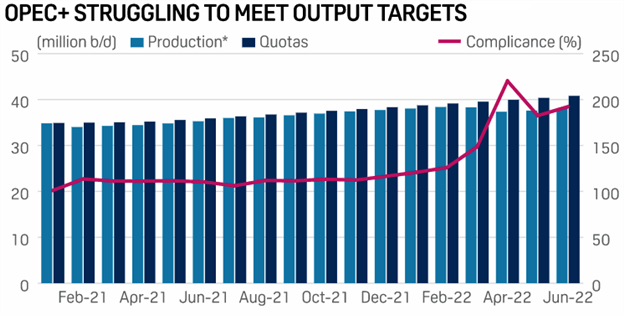 Anonymous US officials said they are optimistic about the OPEC conference, after President Joe Biden’s meeting with the Saudi Arabian crown prince Mohammed bin Salman (often called “MBS”). Tensions between Riyadh and Washington have been high since the 2020 US presidential campaign, when Mr. Biden said he would make Saudi Arabia a “pariah state” after the alleged assassination of Jamal Khashoggi.

It is perhaps then not entirely by coincidence that Mr. Biden was unable to get OPEC leaders – and Saudi Arabia in particular – to publicly guarantee more oil production. The Saudi foreign minister stressed that the issue was not around a shortage of oil in the market but rather due to a lack of refining capacity.

READ MORE: How to Trade the Impact of Politics on Global Financial Markets

Biden’s turnaround was likely prompted by efforts to increase supply and bring down oil prices amid multi-decade-high inflation ahead of the midterm elections on November 8. This may not be the only place where the administration has changed tack in this way. Washington is reportedly considering easing sanctions on Venezuela to allow more oil supply to spill onto the global market.

The US and the G7 are also considering putting a cap on the price of oil to reduce the revenues Russia is generating and (literally) using to fuel its war effort in the Ukraine. However, coordinating with other countries will probably prove difficult. States that are positioned well could extract asymmetric political concessions from the US at a time when the superpower is seemingly in a hurry to move the needle.

The US is on the cusp of – or could already be in – a recession, conventionally defined by two consecutive quarters of negative growth. Consequently, OPEC may weigh this along with other reports – like the IMF’s, which indicate a global slowdown ahead – in its decision on August 3. In fact, the oil-producing cartel may cut production in advance of an accelerated slowdown.

Brent may initially spikeas a result, before gradually curbing its enthusiasm as macroeconomic forces pressure key commodities. As investors saw in 2018 amid the US-China trade war, demand was the overarching force pushing crude oil prices lower despite numerous production cuts by OPEC and its cartel-adjacent allies.

The group’s decision will likely be a function of political considerations as well as macroeconomic circumstances. As we saw in 2020 when Moscow and Riyadh went head-to-head and crude oil prices plunged, OPEC and its members have proved to be willing to do what is broadly inconvenient, even for themselves.

Crude oil prices appear to no longer adhere to the previously-stubborn rising support channel from February. The first break occurred in early July, and Brent has since had razor-like oscillations between the now-obsolete floor. Looking ahead, the global oil benchmark may continue to flirt with a support band between 89.97 and 87.86 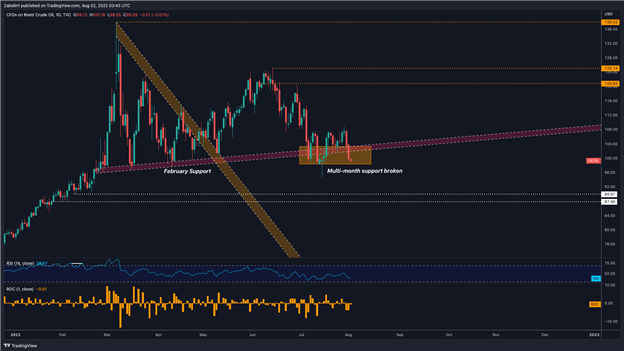 Flirting with that level and ultimately following through could precipitate an even more bearish posture. Brent may catch a break if selling pressure temporarily gives way to a short-term recovery, fueled by buyers looking for a bargain. However, this deviation would likely be temporary before prices resume its descent.

What do you assume the largest factor to come back from the $TWTR whistleblower’s...

Wipe Out 2! Bitcoin And Ethereum Plunge As Fed Tightens And...