Crude opened higher in Asia today on the back of lower inventory levels and a weakening US Dollar in the aftermath of the Fed’s 75- basis point (bp) rate hike.

The drop in stockpiles was then confirmed on Wednesday when the Energy Information Administration (EIA) reported that holdings in the strategic petroleum reserve fell by 4.5 million barrels. This was a larger decrease than expected and takes the reserve down to 422 million barrels

The fall in stockpiles has outweighed concerns of a global slowdown for now. The markets reacted to the Fed hike by selling USD across the board with expectations of a deceleration in the pace and scope of future rate rises.

Fed Chair Jerome Powell said in remarks after the decision that the summary of economic projections (SEP) from June were unchanged. This allayed market concerns of an acceleration in rate hikes.

Powell made it clear that more rate rises are coming but it is the rate of change that the market is focussed on. The market has priced in at least a 50 bp increase at the Federal Open Market Committee (FOMC) meeting in September.

A key feature of the rise in crude prices earlier this year was the steep rise in backwardation. It occurs when the contract closest to settlement is more expensive than the contract that is settling after that first one. It highlights a willingness by the market to pay more to have immediate delivery, rather than having to wait.

Backwardation has slipped lower this week and is approaching levels not seen since the Russian invasion of Ukraine. If it continues to go lower, the price of oil might be able to drift lower.

At the same time, volatility in the oil market, as measured by the OVX index, has been relatively benign and may reveal that the market is not overly concerned with current pricing.

Looking ahead, Exxon Mobil Corp and Shell Plc are due to report earning this week and OPEC+ willbe meeting next week to appraise their supply policy. 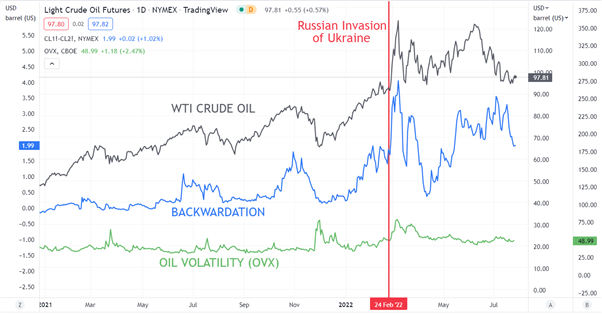 Georgia DA Says She Will Have Lindsey Graham Introduced In To Testify In Trump...

Act as a Secure Haven for Russia?