In this edition of Central Bank Watch, we’ll review comments and speeches made by various Federal Reserve policymakers since the June FOMC meeting. Fed policymakers have been in a communications blackout window since July 16, leaving markets to rely on economic data releases to best gauge what the FOMC will do this week.

June 17 – The semi-annual Monetary Policy Report is released, which noted that the Fed’s commitment to bringing down inflation pressures was “unconditional.”

June 21 – Barkin (Richmond president) hints that more rate hikes are coming, noting “we are in a situation where inflation is high, it’s broad based, it’s persistent, and rates are still well below normal.”

June 22 – Powell, delivering the semi-annual Monetary Policy Report to the US Senate Banking Committee, says that the Fed’s efforts could push the US economy into recession, and it will be “very challenging” to achieve a ‘soft landing.’ But the Fed must continue to tighten, as “the other risk, though, is that we would not manage to restore price stability and that we would allow this high inflation to get entrenched in the economy.”

June 23 – Powell, delivering the semi-annual Monetary Policy Report to the US House Financial Services Committee, says “we have a labor market that is sort of unsustainably hot and we’re very far from our inflation target.”

Bowman (Fed governor) says that she supports raising rates by 75-bps in July and “increases of at least 50-bps in the next few subsequent meetings, as long as theincoming data support them.”

June 24 – Bullard (St. Louis president) suggests that fears of a US recession are overblown as consumers continue to have robust balance sheets.

Daly (San Francisco president) says more tightening is required, but “how much additional tightening will be required depends on anumber of factors that fall outside of the Fed’s direct control.”

June 28 – Williams (New York president) believes more rapid rate hikes are needed, saying “my view is we’ve got to get interest rates higher, and wehave to do that expeditiously.” However, he believes US recession fears are overblown, noting “it’s a slowdown we need to seein the economy to reduce the inflationary pressures that we haveand bring inflation down.”

July 6 – June FOMC meeting minutes are released, which showcased strong resolve by the FOMC to bring inflation pressures down as soon as possible.

July 7 – Waller (Fed governor) hints at aggressive rate hikes forthcoming, saying “we need to move to a much more restrictive setting in terms of interest rates and policy, and we need to do that as quickly as possible.”

July 8 – Williams notes that a 50-bps or 75-bps rate hike is possible, noting “we are much lower — even today, with the fed funds trading around 1.6% — well below where we need to be by the end of the year.”

July 11 – Bostic (Atlanta president) says he’s “confident that the economy will be able to withstand this next move,” and that he “would support a 75-bps” increase.

July 12 – Barkin acts non-committal to a 75-bps rate hike, suggesting that he is “one of the guys who like the option value of deciding the week of the meeting as opposed to two weeks before the meeting.”

July 13 – Bostic notes that “everything is in play” for the July Fed meeting, and when asked if that includes a 100-bps rate hike, he responded “it would mean everything.”

US inflation rates have pushed higher, though some gauges, particularly the PCE price index – the Fed’s preferred gauge of inflation – have started to ease, leading markets to price in ‘peak’ Fed rate hike odds. While the Fed will continue to raise rates in 2022, 2023 will likely bring forth rate cuts.

We can measure whether a Fed rate hike is being priced-in using Eurodollar contracts by examining the difference in borrowing costs for commercial banks over a specific time horizon in the future. Chart 1 below showcases the difference in borrowing costs – the spread – for the front month/August 2022 and December 2022 contracts, in order to gauge where interest rates are headed by the end of this year. 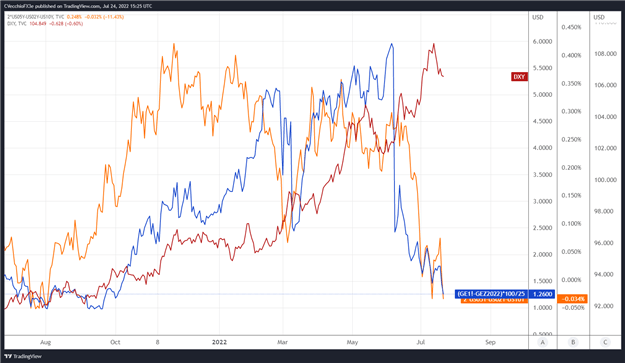 After the Fed raises rates by 75-bps this week, there is only one 25-bps rate hike discounted through the end of 2022 per Eurodollar spreads. Coupled with movement in the 2s5s10s butterfly, the market’s interpretation of the near-term path of Fed rate hikes has become decidedly less hawkish. As markets are ever-forward looking, this week’s rate hike from the Fed may not be a bullish catalyst for the US Dollar if additional rate hikes this year are not signaled. 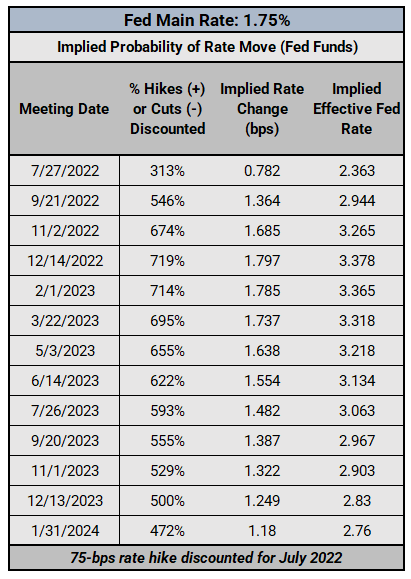 Fed fund futures, however, remain aggressive in the near-term, with a rapid pace of tightening still expected over the next several meetings. Traders see a 113% chance of a 75-bps rate hike in July, 50-bps rate hikes fully discounted in September, and 25-bps rate hikes at the November meeting (the 25-bps rate hike in December is no longer priced-in). The main Fed rate is expected to rise to 3.378% (currently 1.75%) by the end of 2022. 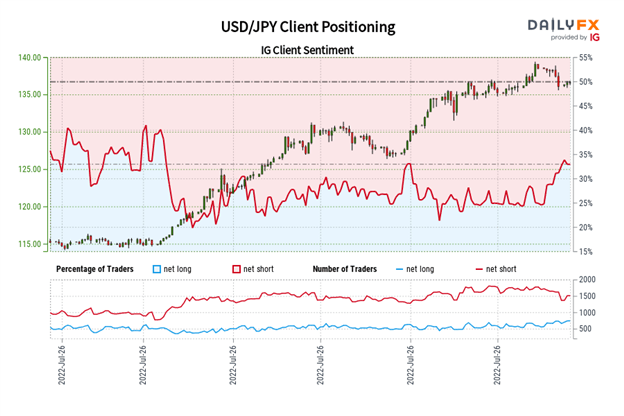 Positioning is more net-short than yesterday but less net-short from last week. The combination of current sentiment and recent changes gives us a further mixed USD/JPY trading bias.