The Euro held its ground on Monday in the aftermath of a larger than expected 50-basis points (bps) hike on Friday.

Robert Holzmann, a member of the ECB Governing Council, said late on Sunday night Austrian time, that a moderate recession may have to be tolerated by the ECB.

This is ahead of the Federal Reserve meeting on Wednesday where they are anticipated to add 75 bps to rates. The US Dollar is treading water ahead of the meeting despite Treasury yields moving lower along the curve.

APAC equities are weaker across the board to start the week following on from a soft Wall Street lead, to close last week. Soft US data on Friday followed by growing Covid cases through-out the Asian region and seemingly never-ending Chinese property woes have weighed on risk assets in the Asian session on Monday.

There are reports that Chinese government authorities are planning to put together a rescue fund to support the 12 largest developers there.

The British Pound is steady as the battle to become the next UK Prime Minister heats up between Foreign Secretary Liz Truss and former Chancellor of the Exchequer Rishi Sunak.

Aussie and Kiwi were hit hard early in the day but have managed to recover some of their losses. The gold price is steady near US$ 1,727 an ounce but copper is lower on the London metals exchange.

Crude oil has continued to move lower with the WTI futures contract trading near US$ 94 bbl and the Brent contract approaching US$ 102 bbl.

After German IFO numbers today, the US will see activity data from the Chicago and Dallas Fed.

EUR/USD has been caught in a 1.0120 – 1.0270 range since Tuesday last week. These levels may provide support and resistance respectively.

The bigger picture shows that it remains within a descending trend channel. 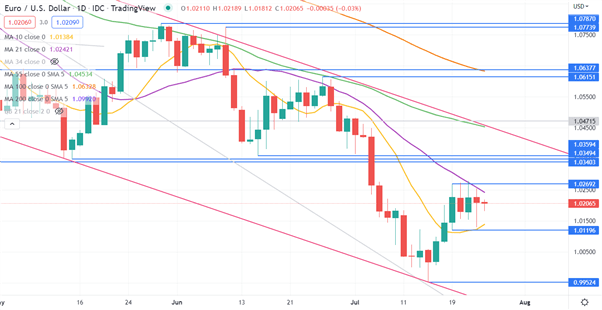 Automobiles Have been Costly This Previous 12 months As a result of the US...

Crypto Is Not Half Of HSBC’s Future, CEO Explains Why