U.S. stocks were subdued at the cash open Wednesday, but quickly took off, pushing sharply higher and rising for the second consecutive session, buoyed by slowly improving investor sentiment and hope that the worst is over in terms of the recent sell-off and extreme pessimism.

At the closing bell, the S&P 500 jumped 0.59% to 3,959, ending at its best level since June 10, with the consumer discretionary and the information technology sectors powering the upswing. The Nasdaq 100, for its part, outperformed its Wall Street peers, surging 1.55% to 12,439, thanks in part to a robust upward move in Netflix, Amazon, Meta Platforms, and Nvidia shares.

Netflix set a positive tone for tech stocks after beating second quarter EPS estimates and losing fewer-than-expected subscribers, a sign that the streaming business may be starting to stabilize in the post-pandemic world, a period that brought hard-to-replicate windfalls for stay-at-home names.

The bullish mood continued during after-hours trading following strong quarterly results from Tesla, the world’s largest electric car maker. The company led by Elon Must reported adjusted EPS of $2.27 on revenue of $16.9 billion, exceeding both bottom-line and top-line forecasts despite slower production in China (Wall Street expected EPS of $1.83 on revenue of $16.88 billion). Tesla shares soared more than 4% in extended trading, although gains were beginning to fade at the time of writing.

Looking ahead, there are no high-impact events on the U.S. economic calendar Thursday, but the ECB’s monetary policy decision in Europe may create some level of volatility on this side of the Atlantic. Traders should also keep on eye on the ongoing earnings season for general clues on the outlook and commentary about how inflation and slowing growth are impacting margins. Key reports tomorrow include will be those from Union Pacific, Blackstone, Freeport-McMoran and Snap.

After Wednesday’s solid rally, the Nasdaq 100 broke above a key resistance near 12,250, rising to its best levels since June 9. With sentiment on the mend and tech stocks starting to outperform, the index could continue its recovery in the coming days, setting the stage for a run towards 12,600, the next ceiling in play. If we see a move above this barrier, buyers could launch an attack on the psychological 13,000 level. On the other hand, if bulls jump ship and sellers resurface to spark a reversal, initial support appears at 12,250, followed by 11,500. On further weakness, the focus shifts to 11,325. 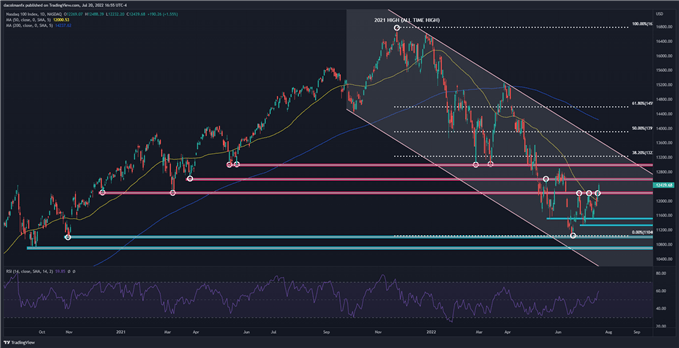 XRP Should Breach This Key Degree To Avert The Downturn