The Australian Dollar has been buoyed by a rosy outlook this week that has seen the US Dollar take a hit and equity indices rally.

The safe haven USD has been less sought after with the source of the positive risk sentiment hard to specifically identify. Speculation that the Fed will only go 75 basis points (bps) higher next week, instead of 100 bps, might have helped

Chinese plans to potentially assist mortgage holders in the face of a boycott and speculation that builders might get funding to finish their projects may have contributed.

Netflix not losing as many subscribers as feared could have also added to the optimism. On the commodities front, mining giant Vale SA announced that they will reduce iron ore production, helping to halt the recent slide in the base metal.

In any case, the Aussie is higher but domestic issues may have presented some roadblocks. The Treasurer and the RBA Governor have both been busy giving addresses and answering questions from the press.

Australian Treasurer Jim Chalmers announced details of a previously flagged review into the RBA and monetary policy. He announced that an independent panel of three experts will review the mandate, culture and operations within the central bank.

He tried to avoid politicising the announcement by saying, “I don’t want this to be all about taking potshots at the governor or the board.”

Then under questioning, he pointed out that higher interest rates are going to hurt everyday Australians, citing increasing mortgage stress. He also highlighted that workers’ interests were not represented on the board.

Sally McManus, Secretary of The Australian Council of Trade Unions’, has previously said that a board seat should be set aside for the union movement. The review is due for completion in March next year.

Meanwhile in Melbourne, RBA Governor Dr Lowe was giving a speech to Australian Strategic Business Forum titled ‘Inflation, Productivity and the Future of Money’. For RBA watchers and economists this hit all the right notes.

He concluded the speech with, “I would like to welcome the announcement today by the Government of the details of the review of Australia’s monetary policy arrangements and the Reserve Bank.”

The gathered press then got their chance at throwing some ‘potshots’, but this is not the Governor’s first rodeo.

He re-iterated everything that had been said before and highlighted similar reviews in Europe and North America had delivered a verdict that a flexible inflation target was desirable.

The current mandate is – ‘the appropriate target for monetary policy in Australia is to achieve an inflation rate of 2–3 per cent, on average, over time’. That mandate would appear to have some flexibility.

It might be that the review will recommend a change in the composition of the board.

Australian CPI data is due out next week and is anticipated to prompt a hike from the RBA at their August meeting the week after. If the Australian Bureau of Statistics (ABS) delivers a red-hot CPI, the RBA could be in the mood for an out sized lift in the official cash rate.

When Dr Lowe was questioned about the aggressiveness of potential rate hikes, he highlighted that if rates are not raised to a point that they stifle inflation, then much higher interest rates will be the result of such inaction.

Monetary policy is rarely as exciting as this! The Aussie still has high correlations to other asset classes, and this might remain so, but a larger than expected move by the RBA could see a snap from such arrangements. Even if it is only for a short while. 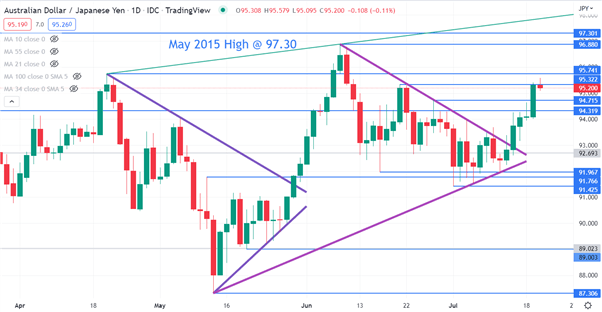 DigiByte Worth Prediction 2022 hit ₹1.60 by the Finish of December | BuyUcoin Began...

US Greenback Index climbs to multi-day highs close to 107.00