After a subdued performance at the start of the week, U.S. stocks soared on Tuesday as dip buyers swooped in to pick up beaten-down shares amid better-than-expected corporate results. Although economic challenges have increased in recent months, U.S. companies have been able to weather the hostile environment with some success, delivering healthy earnings, although it is still too early in the reporting period to draw any major conclusions.

When it was all said and done, the S&P 500 surged 2.75% to 3,937, its highest level since June 28th, allowing the equity benchmark to move out of bear market territory and above its 50-day simple moving average, a bullish signal for the underlying. Meanwhile, the Nasdaq 100 jumped 3.13% to 12,249, driven by a strong rally in shares of Meta Platforms, Nvidia, Alphabet, and Amazon.

While the rebound in risk assets is welcome, sentiment remains fragile amid tightening financial conditions, sky-high inflation and slowing economic activity. Lower liquidity is making things worse and more unpredictable by amplifying price swings in both directions, as seen on Monday, when a negative headline about Apple’s hiring plans gave way to a brutal pullback on Wall Street.

Looking ahead, there aren’t any high-impact events on the U.S. economic calendar until Friday, so the earnings season will continue to steal all the limelight near-term. Traders should pay particular attention to Tesla’s numbers on Wednesday after the close, considering that the electric automaker has a large weighting in both the S&P 500 and the Nasdaq 100.

In terms of expectations, Wall Street analysts are forecasting EPS of $1.73 on revenue of $18.26 billion for the car manufacturer. If Tesla’s earnings and, more importantly, its guidance manage to surprise to the upside in a meaningful way, confidence could improve among investors, paving the way for stocks, especially those in the tech space, to build on their recent gains, at least until economic concerns return to the spotlight.

The Nasdaq 100 soared and overtook its 50-day simple moving average decisively on Tuesday, but fell short of breaching a key technical resistance around 12,250. With bullish momentum picking up, a breakout could be just around the corner, a scenario that could have bullish implications for the tech index and set the stage for a move to 12,600, followed by 13,000.

On the flip side, if prices fail to follow through to the topside and sellers resurface to fade the rally as it has happened many times during the current bear market, initial support appears at 11,500, followed by 11,325. On further weakness, the focus shifts to the 2022 lows just below 11,040. 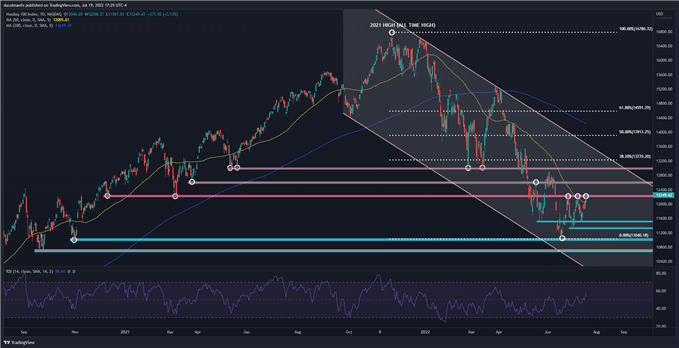