The pound began the European session on the front foot supported by strong UK labor data (see economic calendar below). Unemployment fell but growth in job vacancies (quarterly) are on the decline. UK companies are finding it harder to fill vacancies which could point to higher emphasis on staff retention but overall, the positivity around the UK jobs data print does give sterling some support amid an environment steeped in recessionary fears.

From a Bank of England (BoE) perspective money markets are anticipating a 50bpsinterest rate hike in August with the worker shortage narrative playing into the hands of a more aggressive BoE in conjunction with a hawkish Federal Reserve.

The political situation in the UK has not really had much in the way of material impact on the pound so I do not suspect a change in trend as Tory voting continues. Rishi Sunak remains in pole position while the contest for second place intensifies with results scheduled around 1500BST later today. 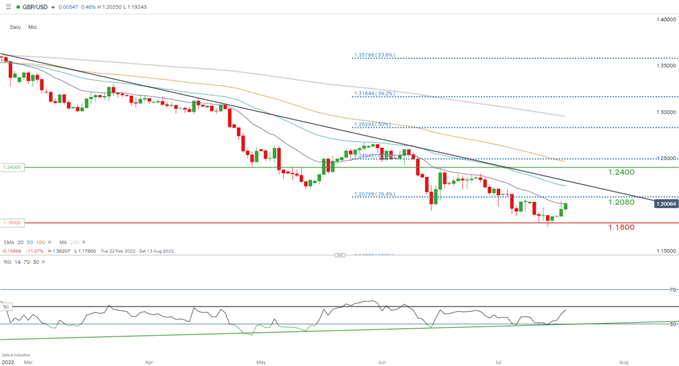 Daily GBP/USD price action has bulls testing the 20-day EMA (purple) resistance zone while the RSI approaches the midpoint 50 level suggestive of slowing bearish momentum. The bullish divergence present (green) on the RSI vs prices action looks to be playing out but a reversal is still far too early to call particularly with so much uncertainty around a potential European energy crisis and a strong U.S. dollar.

IG Client Sentiment Data (IGCS) shows retail traders are currently LONG on GBP/USD, with 73% of traders currently holding long positions (as of this writing). At DailyFX we typically take a contrarian view to crowd sentiment however due to recent changes in long and short positions we settle on a short-term upside bias.

We’ve turned 11: Kraken CEO Jesse Powell discusses how we stood the check of...

AOC Claims Abortion Bans Are a Means to Guarantee Girls Are ‘Conscripted’ to Work...