Each weekend, we review stories like these that have led the charge in NFT chatter throughout the past week. Let’s review all the action from mid-July and take a look at last week’s NFT news.

GameStop launched the beta version of their new non-fungible token marketplace this week, and despite a crowded marketplace landscape filled with plenty of noise, GameStop has still found solid footing in it’s early days.

In the first two days of active trading, the marketplace recorded nearly $4M in sales, which dwarfs in comparison to the likes of OpenSea but is roughly double the number recorded from Coinbase’s NFT marketplace to date.

Automotive firms haven’t been the most foreign players in the space thus far, as a handful of brands such as Porsche and Lamborghini have gotten involved. Last week, KIA joined the mix with a new brand campaign in the U.S.

Centered around the manufacturer’s Soul model, users will be able to obtain NFTs by scanning a QR code that can be seen in a 30-second spot on broadcast TV. Roughly 10,000 of the tokens will be minted.

Non-fungible tokens for automotive brands have seen a variety of results, from last year’s 30ETH Porsche sketch sale, to a massively disappointing Corvette campaign that was recently released by Chevrolet. The custom Corvette Z06 release was a flop by all means of the word, and a Chevy rep described the experience as “very educational.”

Lions, tigers and bears… Reddit, Twitter, Instagram and Snapchat? Oh my. Social media platforms are another major set of firms to get engaged with non-fungible tokens and crypto at large. It’s the latter of the bunch, Snapchat, that is making the latest waves, testing a new feature that would integrate user NFTs into AR ‘Snap Lenses’. The feature is currently in development and could be released as early as next month.

Twitter has previously released hexagonal profile pictures, Instagram is working on active integration, and Reddit has been working on profile pic-esque features for non-fungible tokens, too.

OpenSea Lays Off 20% Of Workforce

Layoffs have been a heavy hit in the crypto market during this year’s bear market, as many exchanges have cut headcount and plenty of projects have been taking major hits. Look no further than marketplace mainstay OpenSea, who announced this past week that one in every five employees at the company would be let go. Macroeconomic factors and global unrest have been cited as major pain points leading to the layoffs, with the company pledging to make a variety of efforts to try to support former employees. 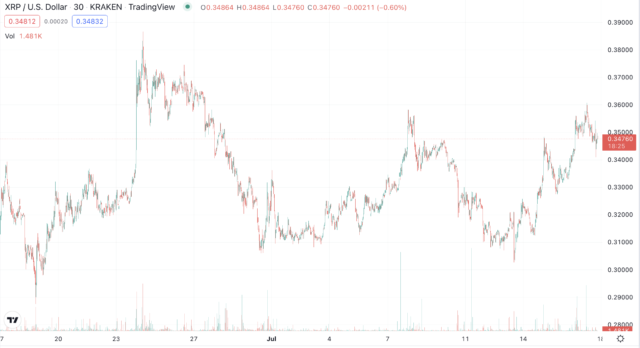 Ripple is a rare mention in the Nutshell, but makes an appearance this week with the acquisition of NFT financing platform Supermojo. The platform aims to build a “seamless, intuitive, and accessible NFT purchasing, financing, and custody experience” for the next generation of users.

Despite a relatively sluggish market, a variety of blue-chip projects have still maintained their status and financial positioning relatively well to the rest of the market. Exhibit A is powerhouse project CryptoPunks, which saw a ~$2.6M sale (2,500 ETH) this past week – the seventh largest CryptoPunk sale in the project’s five-year history.

In the midst of the bear market, major blue chips have persevered while smaller, tier 2 and below projects have taken on the lion’s share of the carnage.

Are blue chip projects like Bored Ape Yacht Club and CryptoPunks the next Disneys of the world? Rarible co-founder Alex Salnikov, in an interview with TechCrunch, believes that “NFT collections will evolve as media companies [into something] like Disney.”