Silver (XAGUSD) is trimming some of Thursday’s losses late in the North American session but remains short of reclaiming the $19.00 barrier on Friday, despite taking advantage of a weaker US dollar, sliding 0.50% as portrayed by the US Dollar Index at 108.093, despite upbeat US economic data.

Silver climbs but falters to conquer $19.00

Global equities are trading with gains, despite that the narrative of high inflation and recession fears is unchanged. US Retail sales advanced by 1% YoY in June, beating forecasts of 0.&. May’s figures were at -0.3%, displaying consumer’s resilience. Later, the University of Michigan Consumer Sentiment for July hit 51.1, exceeding estimations of 49.9 and higher than June’s 50. The UoM survey highlighted that inflation expectations over a 5-year projection were lower from 3.1% to 2.8%.

XAGUSD has also been bolstered by falling US Treasury yields. The US 10-year benchmark note yields 2.934%, down by three bps. Meanwhile, the US 2s-10s yield curve remains inverted for the ninth consecutive trading day, illustrating that investors remain pessimistic and are discounting a US recession.

Elsewhere, Fed officials crossed newswires. The St. Louis Fed President James Bullard said it would not make any difference to hike 100 or 75 bps while adding that the pace could be adjusted for the rest of the year. Later, San Francisco’s Fed President Mary Daly said that inflation is too high, the US economy is strong, and the labor market remains solid. She added that the Univesity of Michigan inflation expectations were a “good thing” and that recession is not her base scenario. 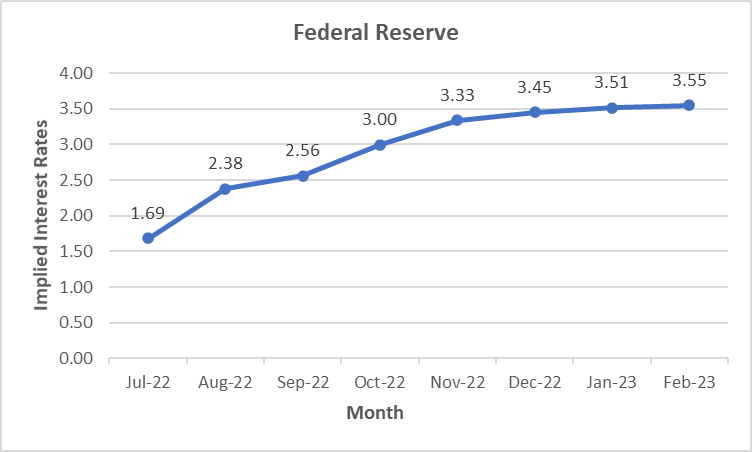 At the time of writing, market participants expect a 75 bps rate hike, as shown by the 30-day Federal funds rate (FFR) futures, and foreseen it would end at around 3.45% by December of 2022.

The week ahead, the Canadian docket will feature Housing Starts, Inflation data, and Retail sales. The calendar will be packed on the US front, Housing Starts, Building Permits, Existing Home Sales, Initial Jobless Claims, and July’s S&P Global PMIs.