That increased the chances for a 100 basis-point rate hike at the July 27 FOMC meeting to over 50%, according to Fed Funds futures. Those bets eased into the weekend but remained higher than before the CPI data. Federal Reserve officials helped to temper those expectations before the FOMC blackout period began on July 16.

Speculators trimmed long bets on the US Dollar for a second week, according to the latest Commitments of Traders report from the CFTC. Despite the two-week decline, speculators remain largely net long on the USD. The data’s reference period ended July 12, which leaves markets in the dark over post-CPI positioning.

US Dollar (DXY) versus CFTC US Dollar Non-Commercial Longs

The Japanese Yen fell to its lowest level since August 1998 versus the USD. JPY makes up 13.6% of the DXY Index’s weighting, coming in only behind the Euro. Japan’s currency weakness stems from its diverging monetary policy. The Bank of Japan has maintained its ultra-loose policy, including yield-curve control (YCC), putting it at odds with its major peers.

Meanwhile, a segment of traders are short Japanese Government Bonds (JGBs) betting on the tail risk chance that the BoJ abandons its 0.25% yield cap. That would result in healthy profits, given that the fair value for those bonds would put the yield around 0.60% although the BoJ is unlikely to capitulate. Instead, the central bank’s inflation and growth targets are likely to receive an adjustment.

The Yen would more than likely see a strong rally on the off chance that the BoJ does move away from its easy policy stance but further downside for JPY is on the cards in the meantime. USD/JPY’s 1-week and 1-month implied volatility measures increased over the past week, suggesting that price swings may increase. 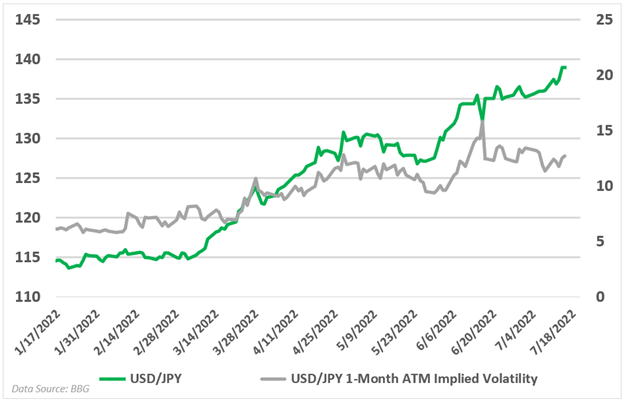 EUR/USD fell around 1% last week, briefly breaking below parity for the first time since 2002. Europe is facing an impending energy crisis as the bloc struggles to secure the energy supplies needed for the winter. European leaders fear that its already strained supply of natural gas may quickly worsen. The Nord Stream 1 pipeline is offline for maintenance until July 21, but Russia may extend the outage even if a turbine from Canada, delayed by sanctions, returns on time.

The European Central Bank is expected to hike its benchmark deposit facility rate by 25 bps on Thursday, kicking off its response to surging prices. That would still leave interest rates negative in Europe and may have a limited impact on food and energy prices, which are being driven higher by supply-chain issues from Russian sanctions and the war in Ukraine. Euro-area inflation hit 8.6% in June. Implied volatility measures increased over the past week, hinting that EUR/USD is set to experience some large price swings. 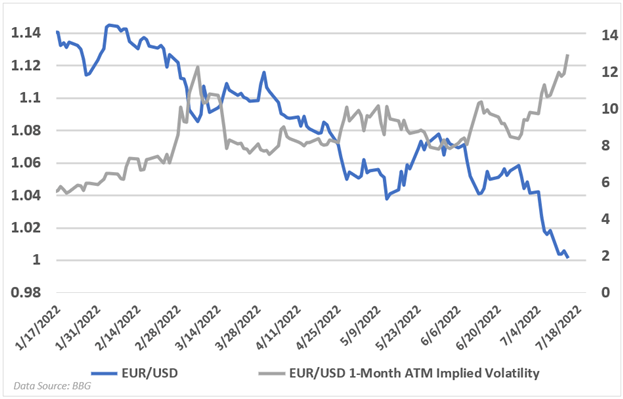 Studying the charts, not buying and selling as a result of an indicator signaled.

Stinking’ “Stonks” Received Smoked however the Pivotheads Nonetheless Have Some Catching All the way...