July 21st is a Crucial Date for the Euro

The 21st of July is key, not just because it marks the ECB rate setting announcement but also because it coincides with the final day that the Nord Stream pipeline is scheduled to be offline for maintenance. Recently, the possibility of Russia halting the return of gas the EU’s largest economy made news as the German Economy Minister announced that plans are in place for any eventuality. Nevertheless, the threat of gas rationing and factory shutdowns are a real possibility if Germany is unable to stock up on sufficient gas before the winter months – weighing on the euro.

After analyzing the top scheduled risk events for next week, it appears unlikely that even if we see shock moves lower in retail sales and Michigan consumer sentiment that markets would ease off on rate hike expectations that are helping support the dollar.

Therefore, if we are to see any lift in EUR/USD before the ECB meeting it could very well appear if we see a sizeable upward surprise in EU inflation data. The ECB has done its utmost to communicate a 25 basis point hike next week. However, some within the ECB’s governing council weren’t able to rule out the possibility of a 50 bps move – which could have an adverse effect on periphery bond yields and support the value of the euro via elevated rate hike expectations.

As we head into next week, we may see EUR/USD trading within a range above the psychologically important 1.000 level. Recent price action has held above parity despite the surge in the dollar alongside upward revisions in rate hike expectations in response to the Bank of Canada’s surprising 100 bps hike yesterday. In addition, positive news for the euro appears nowhere to be seen and yet parity has held so far. Upward drifts in EUR/USD ahead of the ECB meeting may provide opportunity to enter the downtrend back towards support of 1.000. 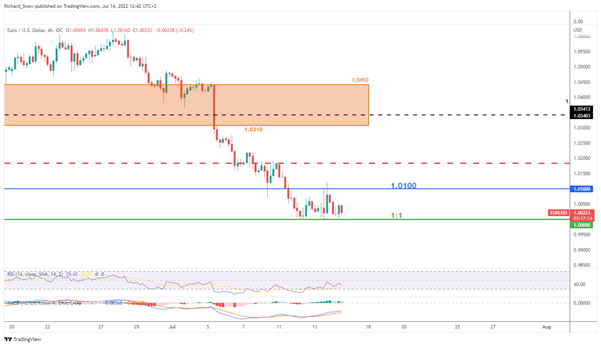 Since the risk of a deep break below parity is very possible, sound risk management should be implemented with protective stops, in the event the range breaks down.

The daily chart helps to show that a move below parity with continued momentum has a long way to run until approaching the zone of support at 0.9615 – 0.9700 witnessed in the early 2000s. 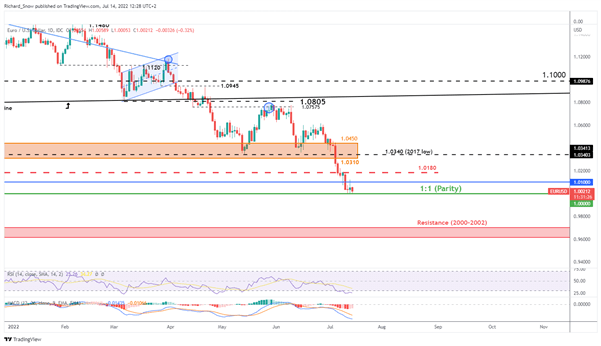 The gap between aggregate shorts and longs has increased in recent days/ the last week. There appears to be a tendency to call the bottom in EUR/USD as traders reduce shorts and pile into longs. Typically, such drastic one-sided positioning, in the opposite direction to the current trend can spell trouble if the eventual reversal is delayed or the market continues even lower. 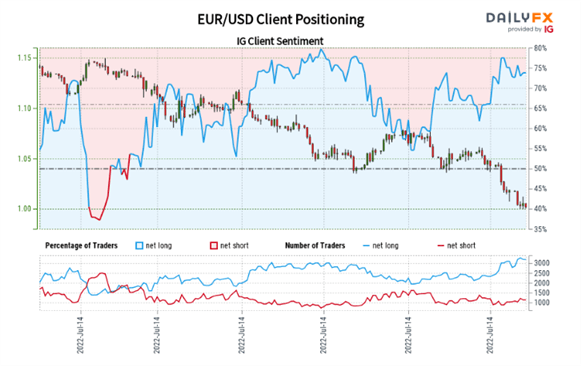 Traders are further net-long than yesterday and last week, and the combination of current sentiment and recent changes gives us a stronger EUR/USD-bearish contrarian trading bias. Russian Rapper “Walkie” Reportedly Commits Suicide To Keep away from Being Compelled to Struggle...

How rather more can we take? – Funding Watch