EURUSD came under pressure yet again on Thursday, as sellers briefly helped price smash through parity. EURUSD has been in a constant grind lower as traders move to price in the growing rate differentials between the Eurozone and US. While the ECB has yet to move at all, traders this week have rushed to price in a 100 basis point move for the Fed in July. Following yesterday’s CPI print and the Bank of Canada’s 100 bps rate hike, the table appeared set for the Fed to potentially make the jump from 75 to 100. However, the Fed’s Christopher Waller hinted that the market may be getting ahead of itself with pricing in a rate hike of 100 bps.

Rate differentials and recession fears have been a massive drag on EURUSD of late, as the divergence in policy paths grows more apparent by the day. Next week the ECB will meet for its July policy meeting, where the central bank is expected to announce its first rate hike in 11 years. The current ECB deposit rate sits at -0.50%, and a hike of just 25 bps would leave the ECB far behind peers such as the Fed, Swiss National Bank, or Bank of Canada in the race toward tighter policy.

The ongoing conflict in Ukraine continues to impede any progress on reducing inflation, as food and energy costs continue to soar. To make matters worse, the Nord Stream 1 pipeline has been shut off for maintenance, and fears have grown over whether flows will even resume when work on the pipeline completes. As Europe broadly considers energy rationing amid this unique and historic situation, unrest continues to grow. Next week’s ECB meeting may be a lose-lose for Christine Lagarde, with headwinds present for the currency whether she raises rates or not. 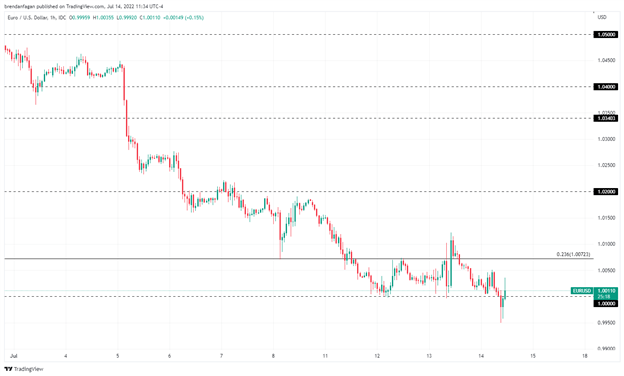 While EURUSD has been able to breach parity, each venture below 1.00 has been bought up swiftly so far. Bulls have been able to defend this key psychological threshold, but it remains unknown just how long this stand will last. Recessionary pressures continue to be an anchor for the currency pair, with some Wall Street experts calling for 0.95 or below by the end of the year. There remains little in the form of support down below parity, with EURUSD sailing on open waters that have not been tested for 20+ years.

Geopolitical uncertainty within the Eurozone also presents a challenging headwind, as former ECB President Mario Draghi announced his resignation as Italian PM this afternoon. Italy remains at the center of the fragmentation debate at the ECB, as the challenges continue to mount for Lagarde and company. Draghi was famously the President of the ECB who stated they would do “whatever it takes” to save the Euro, but it may just be that the fate of the currency rests in the hands of Jerome Powell in Washington. 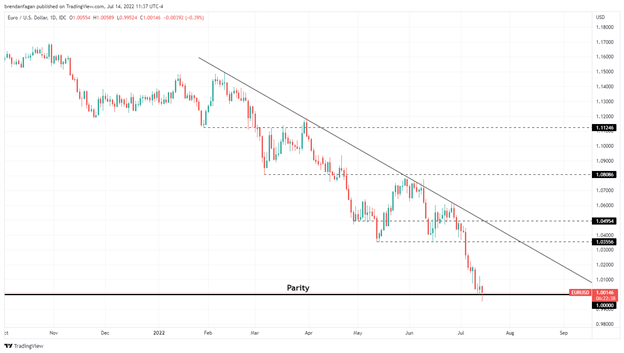 Biden Needs To Scrap Filibuster To Codify Abortion Into Legislation – Manchin And Sinema...