EUR/USD trades at parity for the first time since nearly two decades as it slips to fresh yearly low (1.0000) in July, and the exchange rate may fall towards the December 2002 low (0.9859) as the Relative Strength Index (RSI) sits in oversold territory.

EUR/USD remains under pressure after failing to defend the 2020 low (1.0340), and recent price action raises the scope for a further decline in the exchange rate as it extends the series of lower highs and lows from last week.

As a result, the bearish price action in EUR/USD may persist until the RSI climbs above 30 to offer a textbook buy signal, and fresh data prints coming out of the US may push the exchange rate to fresh yearly lows as the Consumer Price Index (CPI) is expected to increase for ten consecutive months.

The headline CPI reading is projected to hit 8.8% in June after expanding 8.6% per annum the month prior, and evidence of persistent price growth may trigger a bullish reaction in the US Dollar as it puts pressure on the Federal Reserve to step up its effort in combating inflation.

However, a slowdown in the core CPI may generate a mixed reaction as the Federal Open Market Committee (FOMC) shows little interest in implementing a 100bp rate hike, and Chairman Jerome Powell and Co. may retain the current path for monetary policy at the next interest rate decision on July 27 as the central bank appears to be on track to deliver another 75bp rate hike.

Until then, the bearish momentum behind EUR/USD may gather pace as the RSI holds in oversold territory, while the tilt in retail sentiment looks poised to persist as traders have been net-long the pair for most of 2022. 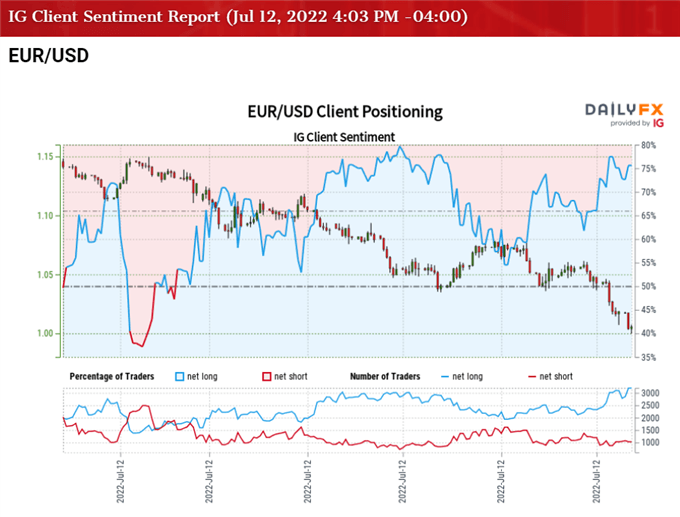 The IG Client Sentiment report shows 72.80% of traders are currently net-long EUR/USD, with the ratio of traders long to short standing at 2.68 to 1.

With that said, EUR/USD may continue to carve a series of lower highs and lows over the remainder of the week as the US CPI is anticipated to increase for ten consecutive months, and the exchange rate may fall towards the December 2002 low (0.9859) as long as the RSIholds below 30. 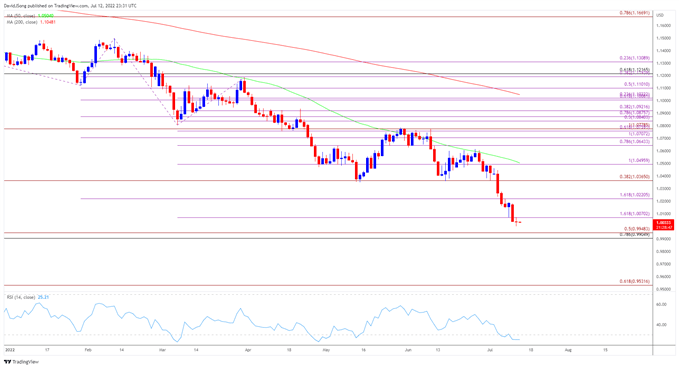 Why precisely did Hunter Biden get $3.5 million from the richest...