The Swiss Franc has emerged as a dark horse ever since the June 16th, 2022 rate meeting. Well, that is not entirely true, the Swiss National Bank (SNB) has a long history of surprise announcements with none more surprising than the sudden removal of the EUR/CHF floor early in 2015 which sent markets into a tailspin. The one certainty of the SNB is that you can count on them to be unpredictable, and it is that unpredictability that provides an opportunity for a longer-term decline in GBP/CHF.

In the June meeting, the SNB announced a shock 50 basis point to take the policy rate from -0.75% to -0.25% and the Swiss Franc strengthened into the end of Q2.

There are some interesting points to note after the meeting, listed below:

These factors bode well for a strong franc.

The Pound on the other hand has been tainted by the ‘stagflation’ title and was unable to shake that unfortunate tag in Q2. Growth slowdowns have been forecasted for the UK economy with recent data to support this view appearing via the March and April GDP data, revealing successive contractions of 0.1% and 0.3%, respectively. Measures of consumer sentiment have also been on the decline as energy prices soar, adding to the ‘cost-of-living squeeze’. Fiscal support has helped alleviate some of the price pressures for lower-income households, but persistent price rises are likely to continue to impact the consumer. UK retail sales for May dropped a significant 4.7% as consumers tightened their collective belts.

Despite the bleak picture of the UK economy, markets are anticipating a further 150 bps worth of hiking into year-end which would leave the rate at 2.75%. Sentiment within the Bank of England (BoE) has shifted as some members of the monetary policy committee felt back in May that growth and inflation risks were more balanced. This implies that the anticipated path of rate hikes may not materialize as such, with the potential to invoke a bearish repricing in the currency (lower GBP/CHF pricing).

The latest downside momentum started with the rejection of the 1.2280 level and accelerated after the SNB rate hike. As the pair nears oversold territory, we could see a pullback. However, if this process were to be a runaway market, we may not see a significant pullback at all. There is not a long way to go before testing the significant 1.1650 level which acted as a pivot point in the past but due to everything mentioned previously, it is possible for the move to drop towards the 1.1530 level – the low after the removal of the euro peg in 2015. 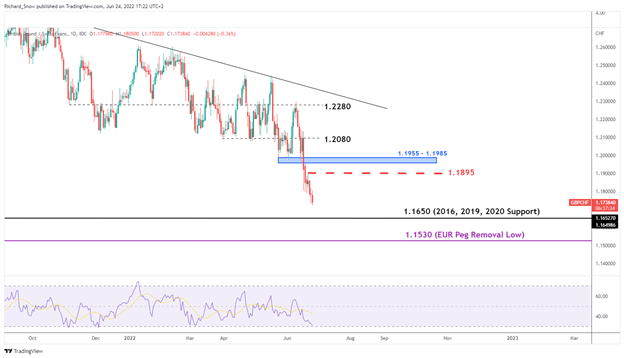 At a stage when the BoE has been identified as a reluctant hiker amid concerning economic projections, the SNB is only just getting started with its rate hiking cycle. Additionally, the SNB only meets 4 times a year, meaning that if inflation data remains intolerably high, we could see an emergency meeting in Q3, adding to the short GBP/CHF bias potential.

German Preliminary Manufacturing PMI drops to 47.0 in January vs. 47.9 anticipated

EUR/USD could take a look at the 1.10 mark short-term – Commerzbank

Japanese Yen Steadies on PMI Knowledge and Markets Assess Dangers. The place to for USD/JPY?

USD/JPY leans bullish in the direction of 138.00 regardless of downbeat choices market indicators

Sees upside above 79.80 forward of US Inflation