UPDATE: Mullen Automotive stock leapt 12.2% at Friday’s open to $1.20. Call options expiring on July 15 jumped 100% for the $1.50 strike price to $0.08 during the morning session. Nearly 25,000 contracts have traded hands at that strike this morning, which covers 2.5 million shares. Of course, it is a penny stock, so that is not all that much money. There is a dedicated fanbase though for this one. It is a bona fide penny stock favourite! All three major indices are lower on Friday but not by much. Nonfarm payrolls came in decidedly hot for June. The US government reported 372,000 new jobs on net for last month, which blew the consensus for 270,000 out of the water. The markets are now preparing for a higher than expected fed funds rate increase at the next Federal Open Market Committee meeting. It is thought that strong job growth will lead to even higher inflation and a Federal Reserve even more intent on stopping inflation by a forced slowing of the economy through juicing the interest rates.

NASDAQ: MULN rose higher for the second straight day as the broader markets surged ahead of the key jobs report that is being released on Friday morning. On Thursday, shares of MULN added 4.90% and closed the trading session at $1.07. US markets pushed higher once again as all three major indices made gains in another bullish session for stocks. Investors shrugged off lingering fears of a recession to send the S&P 500 higher for the fourth straight day, marking the first time this year that this has happened. The Dow Jones gained 346 basis points, the S&P 500 rose by 1.50%, and the NASDAQ gained 2.28% during the session.

Stay up to speed with hot stocks’ news!

EV stocks were on the rise after the Chinese government and Volkswagen CEO Herbert Diess had positive things to say about the global EV sector. First, Beijing’s Ministry of Commerce has supported the sale of both new and used cars, with a special remark noting that it will likely extend the subsidies for new-energy vehicles sold in the country. Diess remarked that the EV sector is still in great shape over the long-run and that the German automaker had just broken ground on its $20 billion battery plant in Germany. 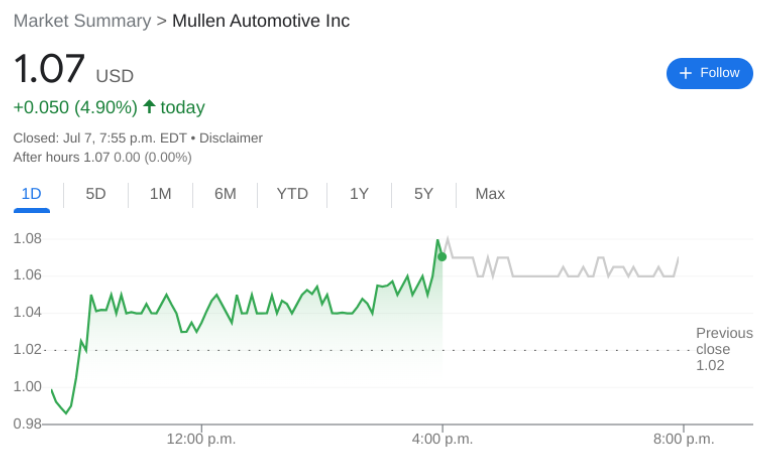 Shares of Tesla (NASDAQ: TSLA) had their best day in some time as the EV leader gained 5.33% on Thursday. Aside from the support from the Chinese government, Tesla investors were also thrilled that CEO Elon Musk’s acquisition of Twitter (NYSE: TWTR) is in serious jeopardy. Tesla’s stock started a downward trend once Musk announced that he was looking into acquiring the social media company.

Methods to Learn a Candlestick Chart

A Information to Buying and selling Psychology

What Closing Qtr Of 2022 Has In Retailer For YFI Worth

Methods to Learn a Candlestick Chart