The US Dollar may rise in the week ahead on the back of Fed minutes and the high-stakes G20 summit. The former may inspire an uptick if it reveals monetary authorities are feeling more hawkish relative to market expectations, thereby increasing the Greenback’s rising yield advantage against G10 and emerging market counterparts.

The Dollar may also rise if a key summit among G20 foreign secretaries amid the Ukraine War puts markets on the defensive and brings out the allure of USD’s liquidity. The Greenback has enjoyed a macro-fundamental environment that is double-boosting its appeal in risk averse and yield-seeking circumstances. This week will likely amplify this dynamic.

Foreign ministers from the G20 countries will be convening this week in what is anticipated to be a tense if not slightly awkward meeting. Russia’s representative Sergei Lavrov will likely be facing a coalition of condemnation from Western and US-aligned countries amid the war in Ukraine.

US Secretary of State Anthony Blinken will not likely have any meeting with his Russian counterpart, further underscoring the deep divide between the two nuclear powers. Mr. Blinken is anticipated to put pressure on Russia to reopen key seaports that are being blocked by the conflict in Ukraine.

With inflation at multi-decade highs, and the Biden Administration characterizing it as the “Putin price hike”, a blame game between the US and Russian representatives is likely to ensue. Mr. Blinken will likely blame the invasion of Ukraine as a key element in global inflationary trends, while Mr. Lavrov will likely counter that it is US sanctions that have inflicted more damage.

READ MORE: How to Trade the Impact of Politics on Global Financial Markets

China will also be a target for Washington. Prior to the invasion of Ukraine, Russia and China declared a “no limits” friendship, though Beijing has not officially supported or condemned Moscow’s “Special Military Operation”. However, the US made it clear that any support for Russia with military or financial aid could result in penalties – such as sanctions.

But China will also be a key player for the US. NATO’s Strategic Concept 2022 was released last week, and in it, leaders for the first time in the military alliance’s history mentioned China as a growing threat. Many have drawn a parallel between Russia’s invasion of Ukraine and the Asian giant’s hostility towards Taiwan and fears of similar imperial adventurism.

Breakthroughs are unlikely, though if any consensus is reached between Russia and the US, and progress is made on opening key ports and reducing inflationary pressures, markets may rejoice. The Dollar may rise with equities, potentially pushing commodities – like grain – lower, both as a function of a stronger Greenback and an anticipation of increased supply.

Traders will be paying close attention to the release of the Federal Reserve’s minutes of the June meeting. Officials hiked rates by 75 basis points; the last time this was done was in 1994. As the cost of credit has risen, markets have tumbled as the Fed has begun to unequivocally prioritize taming inflationary trends it famously said were “transitory”.

The central bank remains steadfast in its resolve, and this is what is making markets nervous. Even as recent as 2018/2019 when growth began to slow and investors panicked, the Fed quickly stopped raising rates and began to reverse their hikes. However, the stakes now are much higher, and the circumstances are far direr.

The current environment – as in the last 10 years – has seen ultra-low interest rates become the benchmark, and therefore, the new normal. Historically, (and rather comically), interest rates were – up until recently – at a 5,000-year low. But markets have become addicted to an ultra-easy credit regime. Consequently, rising rates now feel like an impossible mountain to scale.

Interest rate futures are showing investors pricing in just about a 75-basis point hike for July, so if the minutes reveal that policymakers are more hawkish than markets were expecting ahead, volatility will likely ensue. Equities would likely extend their tumble, while the US Dollar may rise from demand for liquid assets, especially those that carry a yield advantage.

EUR/USD recently hit a 20-year low, trading at 1.0235 after falling over 1.48% on July 6, the largest single-day decline since March 19, 2020 and before that, June 24, 2016. The 100-day moving average shows downward momentum remains strong. Though it should be noted, this is not a guarantee of future price movement – it is based on prior data. 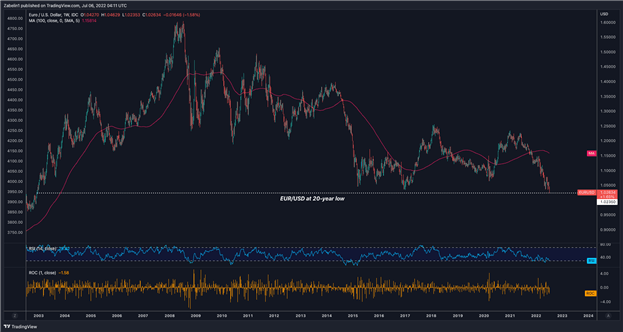 Year-to-date, the pair is down over 16%, with the relative strength index (RSI) showing no signs of positive divergence. The pair’s decline is in large part due to the macro-fundamental circumstances laid out above and is being driven primarily by an increasingly-stronger US Dollar.

Where support will now lie is unclear, given that the last time EUR/USD was trading at this level was over 20 years ago, and the technicals from two decades ago are now likely obsolete. What is clearer now, arguably, are where pockets of resistance may lie in wait, should EUR/USD reverse its decline.

But it is more likely that the pair will continue their descent. A potential, short-term reversal may take place, though traders should be cautious. This would likely be more of a temporary respite from the broader decline than the beginning of a meaningful reversal. Selling pressure might simply alleviate briefly before building back its strength to resume the downtrend.

Written by Dimitri Zabelin for DailyFX

IMF Says the Worst Is But to Come and 2023 Will Really feel Like...

Who’s Who: A few of America’s Most Influential WWI Veterans

Prime American Commander Warns “The Large One Is Coming” And Admits “Ukraine Is Simply...