Inflation Becoming Political in Japan Ahead of Elections

The rising cost of living continues to squeeze household incomes ahead of Japan’s upper house election on Sunday. A recent poll suggests that while the governing LDP party are likely to secure a majority victory, support for the current prime minister Kishida is waning. Approval ratings for Kishida came in at 54%, down from 59% three weeks ago.

Kishida is looking to secure greater support within his own party as a worsening inflationary outlook may lead to a move away from legacy “Abenomics” – Japan’s ultra-stimulative and supportive monetary policy that has remained since Prime Minister Shinzo Abe’s tenure.

With the result of the election looking like a mere formality, outsized moves in the yen appear unlikely but volatility is still likely to pick up as we head into the weekend.

The 4-hour chart shows price action consolidating above 135 while remaining in what appears to be a symmetrical triangle. Such a pattern is inherently neutral – meaning that we could be seeing signs of bullish fatigue in the pair. Yesterday the dollar surged against most currencies as fears of a potential US recession filtered into global markets but USD/JPY emerged unscathed. 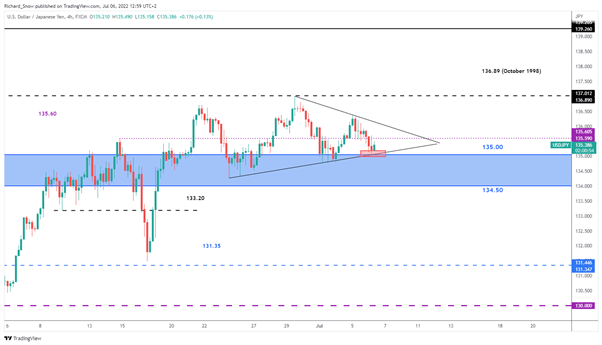 The daily chart further supports the view that the market could be at a critical juncture, as the bullish advance appears to be slowing. 134.50 stands in the way of a lower move for now, with 131.35 a really key level for continued downside momentum. Resistance lies at the October 1998 high of 136.89 and 139.26 if we are to reach a new high. 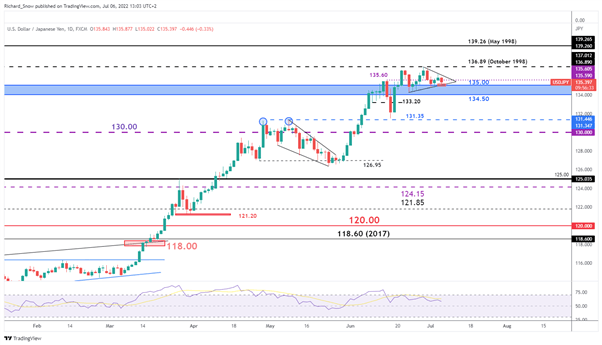 Today we see the release of US services PMI data and the FOMC minutes. The services sector is the largest sector in the US and will be monitored closely for clues around the economic slowdown in the US.

Friday however, may be crucial for USD/JPY should we see a negative surprise in the jobs data and another move higher in the inflation rate. The phenomenally strong labor market has allowed the Fed to hike rates in an aggressive manner but signs of a susceptible jobs market could result in a downward revision in rate hike bets which may lead to a softer dollar. 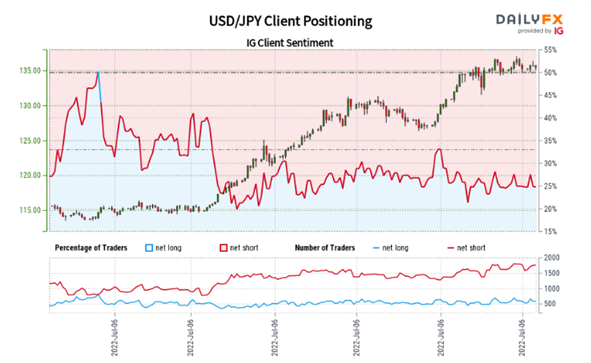 Aggregate client accounts are shaping up for a possible reversal in USD/JPY but have been doing so for a while now. Lower moves in USD/JPY are more likely to be as a result of a softer dollar than yen strength.

Traders are further net-short than yesterday and last week, and the combination of current sentiment and recent changes gives us a stronger USD/JPY-bullish contrarian trading bias. Helium (HNT) Recovers With Double-digit Acquire, Can Bulls Push to $12?

SOL Makes One other Shot At $44, After Two Failed Makes an attempt This...